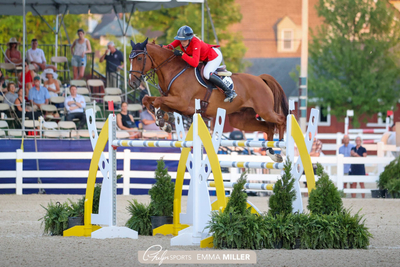 McLain Ward on Contagious, his mount short listed for the World Championships, was competing in the jump-off when Ward made a tight turn and Contagious slipped and fell, thus incurring disqualification.

It's great that he's fine because, although Ward is short listed on two horses, Contagious is a proven winner, having been on the silver medal team at the Tokyo Olympics, so he's a World Championships hopeful.

Second to go in the jump-off, Mendoza finished clean and fast, in 35.79 seconds.

Rizvi , the youngest rider in the class at 16 and coming off a few wins on Junior Weekend at Devon, on Exquise du Pachis was fourth, clean in 38.24 seconds.

“WE'VE BEEN together about a year now, said Mendoza of Play. "He is my best horse, my grand prix horse. I plan to take him to Europe in a week to do Nations Cup classes there. I didn’t really expect him to quite as fast as he was today, I think I turned super tight, and he was great. He is going to do the Grand Prix and then maybe the Speed Derby Saturday as well. We will see how the grand prix goes. Since the day I got him, we jumped a big class straight away. He has been amazing and the bravest horse I’ve ever had. He’s so scopey. It’s nice to go and know no matter what height comes toward me he is going to get to the other side, and it’s a nice feeling.”

“I think I had an advantage of going early in the jump-off," she said. "I had the good ground, and if I had watched everyone I may have tried to go even faster. I wasn’t aware of how quick I was until I watched everyone else. I think that helped me somehow. I think it was the tight turns that won it for me.”

“The courses were great,"said Mendoza. "I thought it was a really perfect course and got the right amount of clear rounds. The time was good. It was my first time here so it was amazing to compete. I’ve never been and the atmosphere is already great on day one.”