LISBON, Portugal--Alex Matz was the star of the young team led by chef d'equipe Anne Kursinski that competed in the Nations Cup in Lisbon on May 27, going double clean for the team that finished sixth on 24 faults. 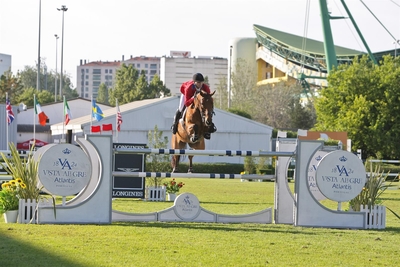 Alex Matz on Cashew (Photo by NunoPragana)Over a stiff course, there were only three double clear, of which Matz was one, an excellent performance in his first European competition.

The team of Matz of Coatesville, Pa., Charlotte Jacobs of East Aurora, N.Y., Julie Welles of Wellington, Fla., and Daisy Farish of Versailles, Ky., traveled to Europe to compete in two international competitions under a program designed to give experience to young up-and-coming riders.

The team in Lisbon competed on the same day that a team of riders short listed for the World Championships rode in a Nations Cup in Rome, where it finished tied for third but placed fourth on a total time taken to break ties.

The team in Lisbon finished on a team total of 24 faults following two rounds of competition at the Sociedade Hípica Portuguesa.

Welles on Constable II rode first for the team over the course designed by Bernardo Costa Cabral of Portugal and had one rail down for 4 faults.

Jacobs on Edocenta rode second for the team, also having one rail for 4 faults.

IN HIS U.S. Jumping Team debut, Matz on Cashew CR wowed, securing the only double clear effort of the day for the team.

Matz rode efficiently and quickly to finish his first round in 71.01 seconds, keeping the team competitive with one more to go in the first round.

Farish on Gerko added eight faults in her first round, which served as the drop score for the team, moving them to the second round on eight faults.

Unfortunately, in the second round, Welles was eliminated, putting pressure on the remaining three team members to finish as a team.

Jacobs had 8 faults, dropping two rails in her second round, to take the team total to 24.

Matz on Cashew CR, a 2008 Holsteiner gelding owned by Dorothy Matz, rode his second round perfectly, with almost identical precision to his first round, finishing in 71.06 seconds and was one of only three double clear efforts of the day.

Farish as the anchor rider for the team added 8 faults to the team total in her final round.

Finishing behind the U.S. was Brazil on 24 faults, Great Britain with 26 faults and Italy on 42 faults.