LEXINGTON, Ky.--Michael Jung on fischerChipmunk won the Kentucky Three Day five star competition, the only rider to finish on his dressage score of 20.1 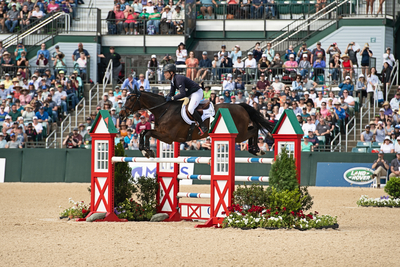 Michael Jung on fischerChipmunk (Photo by Jen Emig forMacMillanPhotography)But one hopeful sign going into the World Championships later this summer is that six of the top 10 competitors in the five star were Americans, a better showing than last year, when only three were in the top10 and Boyd Martin in fourth was the highest placed American and Phillip Dutton in eighth was second highest placed.

"Look at the top10," said Bobby Costello, the current chef d'equipe, who will serve through the World Championships. "We have a lot of Americans in the top 10, and that's a good thing. There probably will be even more Europeans coming over to compete here. It's an easy trip, and there's good money here."

Martin on Tsetserleg TSF had been standing second going into stadium jumping, but with two rails down and time faults he dropped to fourth on a score of 38.5, moving Great Britain's Yasmin Ingham to second on a score of 31.7.

Doug Payne on Quantum Leap, clean in jumping, was third and, as the highest placed American, won the CCI5*-L National Championship on a score of38.4, with Buck Davidson fifth on Carlevo on 38.6.

Will Coleman on Dondante was seventh on 41.4, followed by Sydney Elliot on QC Diamantaire in eighth on 44.0 and Dutton 10th on Sea of Clouds, 46.8.

Hopefully, this will mean better results at the upcoming World Championships than we achieved at last year's Olympics. 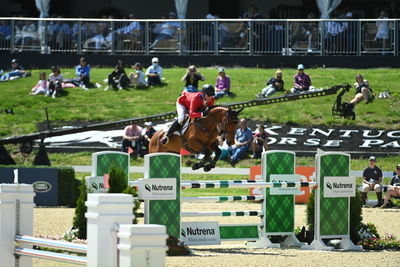 Doug Payne on Quantum Leap (Photo by Allen MacMillan)Jung set a new record for a winning score in the CCI5*-L at the Kentucky Three-Day Event, and his score was the lowest winning score ever achieved in a CCI5*-L.

“I had a really great feeling in the warm-up, and it makes you a bit more relaxed, but the pressure is on and it was like a test for the world championships later this year,” Jung said. “So I tried to stay really concentrated and focused with this horse. He’s amazing. I was able to enjoy every phase through this competition.”

This is Jung’s fourth win on the Kentucky bluegrass, making him second only to Bruce Davidson in wins here, as Bruce has five.

It was his 11th CCI5*-L victory, which ties him with Mark Todd, and only renowned British eventer William Fox-Pitt has more, with 14.

“Of course you always try to do your best, that’s why you wake up every morning and go to stables in minus 20 degrees, and in the rain, and in the heat,” Jung said. “It’s a very special moment for me, and I have to give thanks for my whole team in the background, helping train the horses and bring the horses to this level. And big thanks to the fischer group so that we can keep this horse in Germany and make it so that I’m allowed to ride such an amazing horse.” 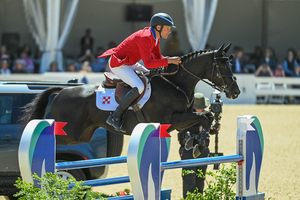 Boyd Martin on Tsetserleg (Photo by Allen MacMillan)Clean rounds were few and far between, with time running tight and rails falling.

“If someone told me I’d be sitting here and in second place to Jung, I wouldn’t have believed it,” Ingham said. “I have to thank everyone involved with Banzai, he is so special and really deserves this result. Our whole team, we couldn’t do this without them.”

Banzai Du Loir was competing in his first five-star, and Ingham is also relatively new to the level, with only two under her belt prior to the weekend.

“He has exceeded all expectations,” Ingham said. I have all the confidence in this horse. He was very professional all weekend, and it was amazing to pull it together for all three phases at such an incredible event. It was tough to get to the flights and with all the traveling, but I wouldn’t take it back for the world. We’ve been treated so well, so a huge thanks for all the volunteers that make this happen. I’m very thankful to be here.”

This was something of a bittersweet day for Payne, who experienced the highs and lows of sport all at once.

He was thrilled with his result aboard Quantum Leap, a Holsteiner gelding he bought as a weanling, whose double clear round today moved him into third and into the National Championship.

Buck Davidson on Carlevo (Photo by Allen MacMillan)However, he also announced the retirement of his long-time partner and Tokyo Olympic mount Vandiver, who had a tough weekend and finished in 24th.

“This is a very tough day actually,” Payne said. “We bought Quantum Leap as a weanling from breeder Elizabeth Callahan, and we now have four horses she’s bred (including both of his CCI4*-S mounts Starr Witness and Camarillo). He was the start of the pipeline of horses coming in. For him to get here, he blew my expectations away and he just continues to get better and better. For an 11-year-old in only his third five-star, I couldn’t ask much more."

“I’m so thankful for the group that owns him with us (which includes, Payne, his wife Jessica and Susan Drillock),” said Payne. “It’s incredible, to sit here and have the privilege to ride such wonderful horses and so many people come together to make that happen. I’d just like to thank them.”

“It’s difficult today, how I’m feeling about winning the national championship. It’ll sink in a few days,” Payne said. “It’s a lifetime of work, but I’m driven to always do better. Having Vandiver retire and having another horse step into his shoes with an incredibly bright future, I’d like to focus on that.”

There were only six double clear rounds over the show jumping course designed by Steve Stephens, with an additional four with only time penalties. 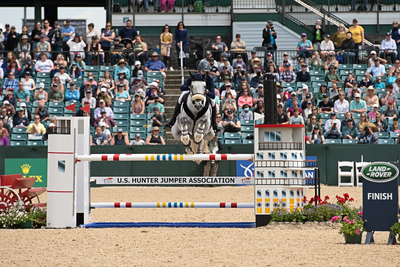 Liz Halliday-Sharp on Cooley Quicksilver (Photo by Jen Emig of MacMillanPhotography)In the CCI4*-S, Stephens’ show jumping course shuffled the top standings, with Halliday-Sharp winning with a double-clear round to finish on a score of 29.7.

She also finished seventh on Cooley Be Cool, who was clean but added 0.4 in time penalties to his score.

“Both of my horses jumped phenomenal today,” Halliday-Sharp said. “I couldn’t ask for more from him, he rose to the atmosphere, and I didn’t expect that many spectators for the four star, it was wonderful to have crowds back. The course was great, well-designed and it made you think about the lines. The time was tight, there’s a lot to see in that arena and you never know what the younger horses might do, but all in all it was a really great day and I’m thrilled for the owners, team and horses.”

Phillip Dutton and Quasi Cool also was clean jumping with 1.2 time penalties to move into second on 38.6, with newly-minted American James Alliston completing his steady move up with Nemesis from 26th place after dressage to finish third after jumping clean and adding just 0.4 penalties to his dressage score to finishon 43.4.

“It’s so exciting for me have a horse coming up like Quasi Cool,” said Dutton. “A lot of this sport is all about the dream, and there are a lot of disappointments, but he looks to have the makings of a great horse. This competition is a great education for these horses, to have a strong cross country like that and to be able to show jump in atmosphere like this is invaluable. I’m excited and hopefully he will grow and really learn from it.” 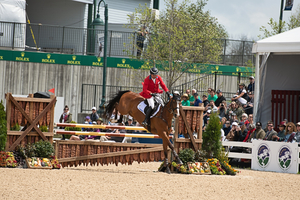 Phillip Dutton on Quasi Cool (Photo by Jen Emig of MacMillan Photography)Alliston is a British ex-pat who lives in California, and changed his citizenship to the U.S. this year after marrying American Helen Alliston.

He started their weekend in 26th place but a relatively quick and clean cross country that added on 9.2 time moved them into sixth overnight, with a strong performance Sunday moving him into the top three.

“I’m thrilled with him,” Alliston said. “It’s a dream to come and do this. He’s only done two Advanced before, and this was quite a hard four star, but we came out from California with the trailer and decided to bring him along as company. But he’s very brave naturally, so I was hoping I wasn’t being stupid. I’m very happy, he’s a good show jumper normally but this is a whole thing with the crowds and the long course, so I’m really happy with him.”

Overall, the course proved challenging with only four double clear rounds, and only an additional eight adding no jumping penalties, just time. As the results would indicate, time was exceptionally tight.

Overnight leader Dan Kreitl came to grief early when Carmango appeared to spook and come to a near stop several strides away from the first fence, putting him down on the clock on a course where time was already tight, then added 12 more faults to seal his fate.

He was also eventually awarded a stop for the first fence, dropping him to fourth on 43.8.

Kreitl had won everyone’s hearts with the story of his personal struggles, including caring for an infant in the NICU and a wife stricken with cancer while holding down a full-time job in real estate, all while attempting to ride at the highest levels.

Despite not having the fairytale ending hoped for, the crowd cheered Kreitl loudly and he was still all smiles and pats for his horse.

Dutton even commented on it, saying, “one part of the sport that’s not fun, is that we all wanted Dan up here. He’s such a great guy and I hope we see a lot of him and his horse in the future.”