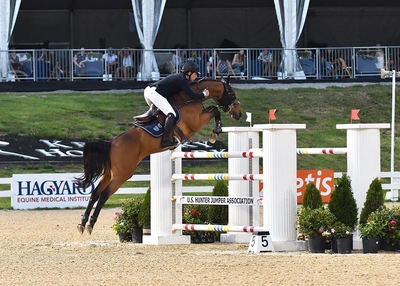 He posted the fastest clear in the second round with a time of 43.170.

“There were seven or eight riders in front of me and all of the four faulters were going as quickly as they could, so I was able to see from quite early on the pace I needed to deliver a good round,” Swail said. “I knew we had to be around 43 or 44 seconds. We knew the plan. It worked out really well. Everything came up nicely and the horse went with me the whole way. He’s a fast horse so thankfully tonight I came out on top.”

SWAIL partnered with “Vinny” in January of last year and soon found success with the 13-year-old Selle Français.

“We’re a very good team together. He’s won four or five grand prix in the last year. He’s been such an incredible little horse and such a fighter. He’s a winner and I’m so thrilled to have him.”

The 2019 class winner Paul O’Shea of Ireland on Machu Picchu was second with two clear rounds and a time of 44.020 in the second round.

“I’ve had Machu since he was 7 years old. He’s 15 now. We know each other very well. He’s been a life-changing horse for me,” O’Shea said. “He’s got a great heart and I hope he stays right and keeps enjoying it.”

Daniel Bluman of Israel on Gemma W was third with two clear rounds and a second round time of 44.310.

“I feel her career is just now starting. She’s in great shape. She felt good today. The year is still long and we have a lot coming, but it’s one of the best horses I’ve ever ridden,” Bluman said. “This is my first time in this event. I think the course designer did a great job. I think the winner is the right winner, and the crowd had a great time. It’s fantastic for us riders to incorporate top show jumping into a day like today.”

After a full day of watching cross-country during the Land Rover Kentucky Three-Day Event, 10,345 spectators remained to watch the show jumping competition.

“These riders are attracted to the quality and exciting atmosphere of the event and the spectators create that,” said Derek Braun, the founder and president of the Split Rock Jumping Tour who produced the event for Equestrian Events, Inc. (EEI). “It’s great to have this incredible crowd to draw from on cross-country day. These fans are so passionate, and I think that creates that level of adrenaline and excitement for the riders.”

Swail echoed Braun’s sentiment, saying, “It’s been a while since we’ve been in front of such big crowds and it gives us all more adrenaline. It’s so much fun having people watching and appreciating what we’re doing.”