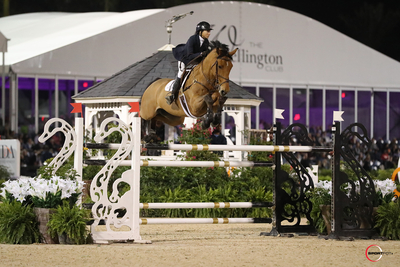 Laura Chapot on Chandon Blue (Photo by Sportfot)Forty-five entries competed over the grand prix course set by Nick Granat with 11 going clean to go on to the jump-off.

First in the ring for the jump-off was Grand Prix Qualifier winner, Cathleen Driscoll on her winning mount Flotylla, who was quick and clean effort in 37.07 seconds, which would hold up for fourth place.

A couple horses later, it was Nick Dello Joio on Cambridge who set the new time to beat at 36.33 seconds, which would ultimately be good enough for a third-place finish.

Dello Joio’s time was quickly slashed as next in was Irish Olympian Shane Sweetnam who finished the jump-off in 35.728 seconds on James Kann Cruz.

After watching her new target in Sweetnam and James Kann Cruz, Chapot and Chandon Blue went pedal to the metal, finishing in 34.485 seconds for the win.

It had been raining off and on all day and started up again when the jump-off got underway.

Chandon Blue, a 17-year-old Oldenburg gelding by Chacco Blue x Landcapitol, was bought by the Chapots from Cian O’Connor who has helped Chapot along the way with him.

He had an extended break this past year when Chapot fractured her arm, necessitating surgery and the insertion of a metal plate.

“He’s a little bit overexuberant right now. He’s so glad to be back in action,” Chapot said. “He’s always been a real trier, and he’s got a huge, huge heart. I think that always helps keep the horses’ interest and keep them going strong.”

“We don’t work him too hard, but at the same time he enjoys it down here in Florida, so I’d like to give him the opportunity to get him in some of the nice classes for him,” she said.

This is the only national grand prix during the circuit to be held under the lights, and Chapot jumped at the chance to compete in that environment.

“I thought it would be a good opportunity for him, because I know he’s been under the lights before, and he loves the excitement and the crowds,”said Chapot. “He was so focused tonight. I was pleased because he was probably as rideable as he’s been the whole time he’s been down here.”

Chandon Blue, a horse Chapot owns with her mother, Mary Chapot, likes the love and attention not just from the crowds, but back in the barn as well. His sweet and kind personality make him a stand-out.

“He has a great personality. There are a few horses that really have strong personalities, and that’s what I tend to gravitate towards,” said Chapot. “Those are the horses that I like the most. It means a lot for me to have him win this class because he really deserves it, and he does feel like he really senses that he’s done well.”

It was a meaningful win tonight for Chapot who, since her injury, has been working with Wendy Coren, DC and David Lundquist, DC for rehabilitation.

Her sponsors and customers have rallied around her, so she was thrilled to punctuate her return with a grand prix victory.

“I feel like this is just a nice way to be like ‘I’m back,’" said Chapot. "Tonight, Chandon Blue was really on a mission. It all came together, which is a great feeling when it all just happens like that.”

Adrienne Sternlicht won the $37,000 1.50m Championship Jumper Classic that started an action-packed day of competition on the Derby Field at Equestrian Village with 50 horse-and-rider combinations competing over Oscar Soberon’s course.

Ireland’s Shane Sweetnam held the leading time for a majority of the jump-off until  World Equestrian Games team gold medalist Sternlicht found an even faster pace.

Sternlicht laid it all on the line with the 11-year-old BWP gelding (Kashmir Van Schuttershof x Houdini Van Overis) with a variety of long gallops and tight turns to shave an entire three seconds off of Sweetnam’s time and blaze through the timers in 42.51 seconds.

“My plan was to have another good class as my horse went really nicely in Thursday’s ranking class,” Sternlich tsaid. “I felt really confident out there, and he absolutely loves the field. He is quite quick across the ground so I just figured we might as well go for it.”

Sternlicht has been partnered with the gelding for roughly a year and a half and has taken her time to develop a strong partnership with the sometimes-quirky mount.

“We have gotten to the point where he really trusts me, and he knows I will always give him the best ride possible,” she said. “He thrives off a confident ride and has a lot of blood, so the key is to find a happy medium while allowing him to do things a bit his own way because he is so competitive. This is my first year on my own and so, for me, this time is about developing myself as a professional and establishing my way.”

Sweetnam on Holliewood was second with the final time of 45.40 seconds, and Great Britain’s young rider Grace Debney was third on Zarina De Vidau, a little less than a second behind Sweetnam on 46.17 seconds.