Laura Chapot on Thornhill Kate wins over a field of 83 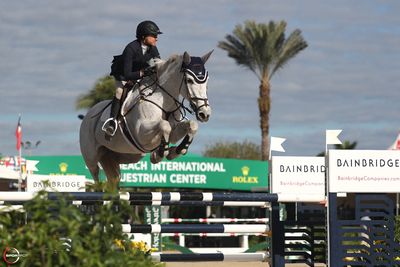 Laura Chapot on Thornhill Kate (Photo by Sportfot)It was an exciting way to start the second week of WEF International, with 83 entries competing in the first class of the day, the 1.40m “power and speed” format class over a course designed by Nick Grana.

Chapot and Thornhill Kate smoked the competition, finishing the speed portion of the course in 24.339 seconds.

However, hot on their heels was another speedy mare, Carmen de Bonnieres, ridden by Conor O’Regan of Ireland, who finished the speed portion in 24.400 seconds, less than a tenth of a second behind Chapot for second-place.

In just a fraction of a second more, Kamille Marcussen, riding Freedam, sped through the timers in 24.441 seconds for third.

Chapot and “Kate,” a 17-year-old Irish Sport Horse mare, have been partnered together for almost six years and have really developed their relationship.

“I THINK over the years we’ve formed a good communication between each other and a good compromise," said Chapot. "I understand the way she wants to be and kind of let her be her own horse.”

“Kate,” a horse that Chapot owns with her mother, Mary Chapot, gets the liberty of being an individual not only in the ring, but back in the barn as well.

"For sure she has her own way. Once she gets to know people, she’s actually really kind, but she definitely is a horse that takes a little time to get to trust,” said Chapot.

“Kate just came in on fire today,”said Chapot. “Her stride was enormous, and she was jumping really, really well, so I knew by the time I got to the speed part that the leave-outs were going to be very easy for her.”

“Kate creates so much speed on her own that the best thing for her is to just keep it smooth and even and not get rushed," said Chapot. "She gets very excited, and when she gets too excited then she gets too quick. If you just think about taking her time, she’s actually very quick and very, very careful at the jumps. If you just trust her speed, she oftentimes ends up being quicker than you expect.”