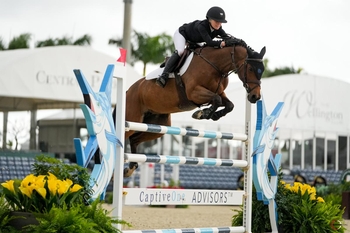 There were 20 that competed over a course set by Anthony D’Ambrosio and Andy Christiansen Jr., with a tight time allowed catching eight riders with time faults. ao only three riders ultimately advanced to the jump-off.

First to jump off was Brian Moggre riding Dior P Z who set the time to beat at 36.95 seconds for an eventual third-place finish.

Next to challenge was Debney and her own Boheme de la Roque, who shaved almost two seconds off of Moggre’s time, finishing in 35.02 seconds.

Matthew Boddy of Great Britain was last to go in both the first round and the jump-off, but he couldn’t quite catch Debney, crossing the timers in 36.20 seconds and finishing in second place.

DEBNEY was competing in the $10,000 High Junior Jumper Classic when it started a torrential downpouring, and management eventually had to put the show on hold.

“I was soaking wet and really cold, but I was honestly really happy I was getting on Boheme de la Roque, because I know she’s always going to step right up to the plate,” said Debney.

Boheme de la Roque and Debney have been together for about a year.

The 11-year-old Selle Français mare came from another junior rider in California.

“I think that actually has helped us a lot, because a small girl had her before, so it’s not like she came from someone big and strong,” she said. “I think that really helped me be able to just get right on and ride her.”

“Around the barn she’s so sweet. She’s my groom’s favorite horse to take care of,” she said.

“She’s definitely been my rock for FEI and all of the stepping up in to the bigger classes," said Debney. "I can always count on her. She’s always trying. She really wants to win just as much as I do, and she’s such a fighter.”

Debney put that competitive spirit to the test in the jump-off, which she felt really suited her mount because of the quick turns followed by long gallops.

Particularly, there was a tight turn to a red vertical across the center of the ring Debney was especially confident about.

“I was excited to really hammer down there and slice that vertical," said Debney. "[Boheme de la Roque is really watching, and she’s always looking for the next jump, so that jump-off was really nice for her.”