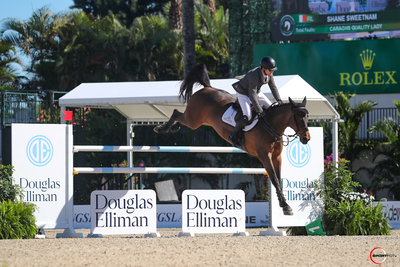 Shane Sweetnam on Caraghs Quality Lady (Photo by Sportfot)There were 37 entries to compete over the course designed by Anthony D’Ambrosio and Andy Christiansen Jr. of Ecuador, 17 of which went clear.

McLain Ward had the time with Bonnie M Z in 63.52 seconds, but had a rail at the ‘b’ element of the double combination.

It was Sweetnam’s quick and fault-free effort with Caraghs Quality Lady in 66.67 seconds that won.

Natalie Dean was clean in 67.38 seconds with Nespresso Van’t Laekhof to place secondand in third was Hector Florentino (of the Dominican Republic, clean in 67.62 seconds on Wyndmont’s Meadow Vale Cruise.

AS THE ribbons were being distributed, Sweetnam snapped a picture of Caraghs Quality Lady for owner and usual rider Anna Beth Athey, who is away at school this week.

She handed over the reins to her trainer, Sweetnam, in order to give the 9-year-old mare more mileage in bigger classes.

“I’ll do the 1.50m on Sunday, and then Anna Beth will jump in two weeks in the two-star," said Sweetnam. "We’re going to build towards her hopefully doing a three-star at some point in the future.”

“I think it’s really going to be a good horse for Anna Beth for the future,” he said. “She’s always competitive in the ring. She feels fantastic. She’s a super jumper, and she’s only getting better.”

“Last year, obviously with COVID, it was a bit restricted and not as many people around, but this year there’s a good vibe and already some good classes have gone ahead,” he said. “I’m looking forward to tomorrow night with a crowd for ‘Saturday Night Lights.’”

Earlier in the day was the $6,000 Bainbridge Companies national 1.40m Speed Challenge.

Ireland was on top once again as Gavin Harley rode Kavalli di Magico to win in 63.062 seconds.

Just a hundredth of a second behind him was Beth Underhill of Canada on Chacco Kid, and Amanda Derbyshire (of Great Britain rode MHS Cardenta to third in 67.89 seconds.