WELLINGTON, Fla.--The women’s team won the $75,000 Battle of the Sexes on Jan. 8, the first “Saturday Night Lights” event of the Winter Equestrian Festival 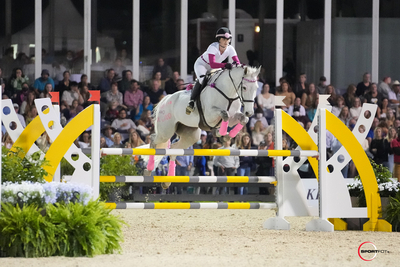 The Battle of the Sexes consists of three phases, with the first being a Table C faults-converted speed course where the riders go to head-to-head over the same course, and the one with the fastest time gains a point for their team.

FOLLOWING the first phase, the score was tied with five points for each team.

The standout was Caelinn Leahy who had a scorching fast round.

In the second phase, each team had three relay groups, where the three riders in the relay each did a section of the course.

The women’s team gained 10 more points with two wins out of the three groups, leading 15 to 10.

The final phase was a match race where riders competed over a course that mirrored itself in the ring, and they completed it at the same time.

When the women won five of the first six rounds at three points each, they secured their victory, and the last four match races did not have to finish.

Leahy sealed the deal for her team by taking the decisive victory over Michael Tokaruk, and the women won by a score of 30 to 13.

This was women’s team captain Soleau-Millar’s first time competing in the Battle of the Sexes.

She took over the role from previous captain Nicole Jayne and had assistance from men’s team captain Charlie Jayne.

“It was an honor,”said Soleau-Millar. “It was some big shoes to fill from Nicole, but it was so exciting. We had an unbelievable team. There were great young riders, up-and-coming riders, professionals that have done it in the past, and we had a blast.”

Soleau-Millar was the very first rider into the ring for the Battle of the Sexes, and she won her speed round over Simon McCarthy.

“We’re hoping to step him up and hopefully get him into some of the two-star clases this year,” she said of her horse. “I’m very thankful that I have that, and it was very exciting. Simon unfortunately had a little bit of a mishap, and so my game plan changed a little. At first, I was going to go all out and do all the inside turns and leave out strides, but at the end I just needed to do an efficient clear round, and so it all worked out in the end.”

Soleau-Millar echoed the sentiment of many of the riders in being back in the International Arena, under the lights, with a large crowd of enthusiastic spectators.

“It was amazing,” she affirmed. “They do a fantastic job here at WEF. The energy was just incredible and so fun.”