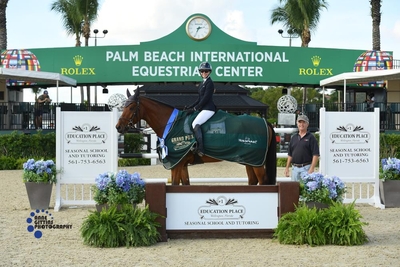 Taylor Land on Get Go (Photo by Anne Gittins)Course designer Anthony D’Ambrosio put up two rounds of jumps that tested the field of international competitors.

After the initial phase of competition, the starting field of 32 was reduced to just four riders who were able to successfully clear the first round.

First to go in the jump-off, Land had a quick and clear time of 39.69 seconds, a time that none of her fellow competitors could match.

“I went third in the first round, so I just had to commit to my plan from walking the course,” Land said. “Luckily I’ve had my horse for a really long time, so I feel pretty comfortable just making a plan and knew he could do the leave-outs in the first round since he has a big stride. I was also first to go in the jump-off, so my plan was to just ride it like the first round but to pick up the pace. Since there were only four in the jump-off I wanted to put the pressure on the people behind me but without going crazy and having a rail.”

Daisy Farish of Lexington, Ky., on Cruemmel 3 was the only other to go double-clear to place second after stopping the clock at 45.39 seconds.

Rounding out the top three was Nicholas Dello Joio on Diamants Aurora, who was just behind Land with a time of 40.45 seconds but had a rail for four faults.

IN ADDITION to winning the class, Land was also named the Martha Jolicoeur Leading Lady Rider for the week, putting her name on the overall leaderboard that will run through the end of the ESP Holiday Series.

Land has been working with the 9-year-old gelding since he was 5, and they just moved up to FEI classes this year.

“Get Go is such an amazing horse and I feel so lucky to have him," said Land. "He has come up through the young horse classes with me and just started stepping into FEI classes with me this year. I want to compete in some of the 2* classes here during WEF, so I wanted to show here since he hasn’t jumped here since he was seven. Now I feel like he’s ready!”

“I haven’t shown here in two years, so I’m really looking forward to coming back in February and March to compete in FEI classes," she said. "The footing in the Mogavero and Denemethy is totally different and the expansion of the Mogavero is awesome. Everything looks great and I’m really excited to be back.”

Forty-two entries competed in the $10,000 1.40m Open Stake on Friday, and exactly one-quarter of the class advanced to the jump-off, which had 13 in the jump-off.

Second was Diego Perez Bilbao of Mexico on McLain Ward’s Blossom Z, clean in 40.07 seconds, and thhird was Abigail McArdle on Victoria 5, clean in 41.09 seconds.