LEXINGTON, Ky.--The U.S. qualifying competition for the Nations Cup Finals in Barcelona, which had previously always been held in Florida, either in Wellington or Ocala, will be held this year in San Juan Capistrano, Calif., from May 10-15, 2022. 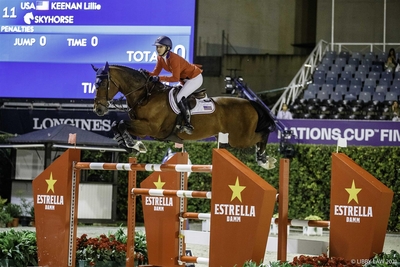 Lillie Keenan on Skyhorse,, a member of the 2021 Nations Cup Finals teamDue to Covid, there was no FEI Jumping Nations Cup series competition in the United States or anywhere else in the world during the past year.

Instead, with no qualifying events, the FEI named teams to compete and one of those was the U.S.

A total of 22 nations, 10 from Europe, three from North America, two from South America, two from the Middle East, two from Asia/Australasia, one apiece from Africa and Eurasia, plus the host nation Spain, were invited to compete at the Final at the Barcelona Polo Club.

With a very young team the U.S. finished a close fifth.

Next spring, the U.S. qualifier for the 2022 Nations Cup Final will be held at Rancho Mission Viejo Riding Park in San Juan Capistrano.

The competition will mark the first time the FEI Jumping Nations Cup in the USA will be held on the West Coast of the United States.

“BLENHEIM EquiSports is very excited to be hosting the U.S. leg of the FEI Jumping Nations Cup in 2022," said Stephanie Lightner of Blenheim EquiSports. "It has been our goal to bring international caliber show jumping back to San Juan Capistrano and Southern California, and highlighting the Nations Cup will be the pinnacle of our competition calendar next year,”

The U.S. leg of the FEI Jumping Nations Cup series was last held in 2020 in Wellington, Fla., with the COVID-19 pandemic halting plans for a 2021 edition.

As the only qualifier for the series held on U.S. soil, the return of the FEI Jumping Nations Cup USA will serve as an opportunity for teams from North/Central America and Caribbean to earn points towards qualification for the annual final competition held in Barcelona, Spain in late September.

The other two qualifying classes are held in Canada and Mexico, and from those three competitions the two nations with the highest number of points qualify for the Finals.

Additional details will be forthcoming and released over the next several months, including information on ticket sales, hospitality offerings, and further competition opportunities.