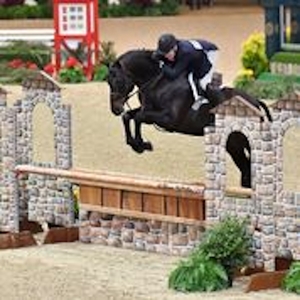 During Tuesday’s competition, the 7-year-old Selle Francais stallion earned a score of 89 in the first round to win the class out of 14 entries and then scored 88 in the handy round, adding another win.

Wednesday morning was no different, with Charlemagne placing first in the under saddle and then Stewart rode the flashy stallion to another win in the Stake class, giving Charlemagne a perfect 40 points to earn the championship in the Green Conformation Hunter division, and the Grand Champion Professional Hunter title.

A total of 124 points throughout the five divisions of in the Green Hunter, 3'6" and 3'9", Green Conformation, High Performance Conformation and High Performance Hunter divisions. with his five mounts, For Always, Charlemagne, Love Note, Cabrio and True Blue, earned Stewart the Leading Hunter Rider.

"CHARLEMAGNE we bought as a 4-year-old and he did the Pre-Green division a few times as a 5-year-old," said Stewart. "Last year he showed twice before we stopped showing because of COVID. This year he was champion at the Pennsylvania National Horse Show, the Washington International and the National, so he has been really consistent and just getting better and better.”

“It’s great," said Stewart of his Leading Rider title. "You always aspire to do this, and it’s nice with Betsee Parker, that owns all of my horses, that she is really into this and it’s a nice reward at the end for her. It is great to be back at the National.  We missed it last year, so it is certainly nice to be back. They do a great job and it’s nice to be here.”

"I have had Concerto for five years, and he is 10 now," said Ingalls. "He has just been getting better and better. We started out in the young hunter divisions and moved up to the Amateur-Owner 3’6” Hunter division for three years now. We were actually champion in the Amateur-Owner’s in 2019. It is even more special to come back and have your name put on these trophies again and be Grand Amateur-Owner Champion this year. He is so chill and is my best friend. I plan to have him forever, and one day he will live in my backyard.”

“This horse show is very dear to my family," said Ingalls. "My mom rode Side Saddle Seat Equitation, and she rode at Madison Square Gardens. She won the Good Hands Final at the National back when they had Saddlebreds. It is just such a special horse show for us, and it means so much to have been champion a couple of years ago and come back to be Grand Amateur-Owner Champion. I know my mom is just floored; it is just really special for all of us.”