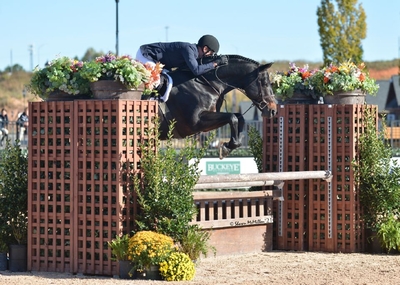 Scott Stewart on Charlemagne (Photo by Shawn MacMillan)“He showed a little bit in the Pre-Green Hunter division as a 5-year-old, and he was quite successful,” said Stewart. “Then last year, I think he only showed maybe two or three times before COVID happened, and then he didn’t compete the rest of the year.”

Stewart credits Charlemagne’s easy-going nature for being able to step up to the plate this week in Tryon Stadium and the Grand Hunter Ring at WIHS.

“He’s really easy every day at home, and he doesn’t really act like a stallion at all,” said Stewart. “He was actually really good in the big ring yesterday. That was exciting.”

AFTER BEING partnered for nearly six years, Laura Sexton and Set To Music are no strangers to the winners circle, but when they emerged the Grand Champions of the Amateur-Owner Hunters 3’6”, it was a little extra special.

In April, Set To Music—known as Calvin in the barn—was found cast in his stall.

Thankfully, he made a full recovery at an equine clinic, but it also kept him out of the show ring for six months.

“We weren’t sure if he would need to retire or not, so the fact that he’s here and is still loving his job makes the win even more special,” said Sexton of Greenwich, Conn.

Once Calvin recuperated and it was clear he wanted to be in the ring, Sexton still made it a point to take it slow with him.

“All summer I focused on getting him in shape and fit enough to be able to jump,” said Sexton. “We took our time and then went to two little local shows at home before coming to WIHS. His successful recovery has made the win mean a lot more. I know this is WIHS and it’s a big deal, but today has extra meaning. It’s very nice and special.”