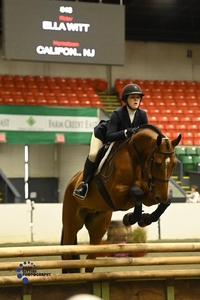 Ella Witt (Photo by Anne Gittins)Witt was an equitation final rooky, but, riding Stakkair, she looked like a seasoned veteran as she rose from sixth to win over Haley Edwardson of Ridgefield, Conn., who finished second and Carolyn Carpenter of Darien, Conn., who was third.

Edwardson took an early lead with an 87 on Deo Volente, followed closely by five other competitors within 3 points, including Carpenter in fourth and Witt in sixth.

The top 25 riders returned to take on the second course, which shuffled the riders as the top six were called back to test in reverse order of their cumulative, unannounced scores.

Heading into the third round, Carpenter sat sixth with Witt second, and Edwardson remaining first.

In the end, Witt's performance over the shortened course, which included hand gallop and counter canter fences, wowed the judges and edged out Edwardson for the win in her first equitation final.

"WE HAVE a saying right before I go in the ring—'cool as a cucumber, eye of a tiger'—and I think that really showed today," Witt said. "I just tried to be consistent since it is my horse's first time at a big final like this and mine as well. I just wanted to try and make everything match, and we've been working on trying to keep the same rhythm around. I was definitely a little nervous, but I tried to take that and apply it to my courses."

"I thought my first round was good—I just was a little deep to one of the jumps but it worked," said Witt. "In the second round, I really tried to show off and move up because I was coming in sixth. Then I came back second, and I was a little nervous about the counter canter because he's not the best at that since he's green, but he really stepped up to the plate. Stakkair is 8 years old, and I am lucky enough to ride him for Emil Spadone and Redfield Farm. I was partnered with him in July, and he's been awesome. He's the best partner I could have asked for."

The 3’3” Hunter Seat Medal serves as a stepping stone for equitation riders, providing an opportunity to qualify and compete in a national equitation final at fence heights of 3’3”.

"I started the 3'3" this year, so this is kind of a build-up to next year in the ASPCA Maclay Finals, so it's definitely a big honor to win," said Witt.