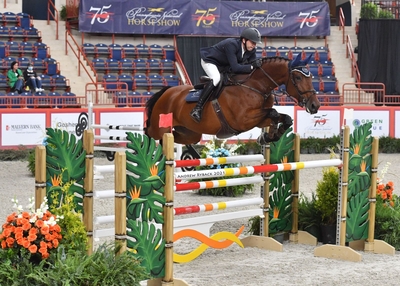 Christian Coyle on Dekato (Photo by Andrew Ryback)Coyle and the 13-year-old Dutch Warmblood gelding were one of 10 entries from the 31-horse field to go clean over the first-round course, set by Manuel Esparza.

When Coyle went in the jump-off with three horses still to follow him, the time to beat was 40.531 seconds, set by Victoria Colvin on Gemino.

“He’s naturally fast,” said Coyle after finishing  in 39.235 seconds to win. “He’s a big horse, but his legs are always moving, and he knows where his legs are."

“It's fantastic to win tonight,” said Coyle, who has had Dekato since February of this year. “More than anything, the horse deserves it. Every day he gives us his all, and as I don't mess up, he's always there or thereabouts, so I'm just delighted for him.”

Finishing second was Colvin on Gemino, and third place was Taylor St. Jacques on Happysine with a jump-off time of 40.582 seconds.

KARET of Pittsburgh, Pa., won the Grand Children's Championship, and Auletto of Tabernacle, N.J., was the Adult Hunter Champion. 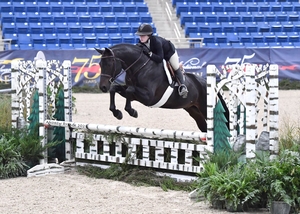 Karet won two over fences classes as well as the under saddle to win the division championship and ultimately the grand championship title.

The reserve championship in the Children’s Hunter, 14 & Under finished in a tie between Hudson Saunders of Briar Cliff Manor, N.Y., on Imposant and Addison Huffman of Churchville, Md., riding Calantus.

In the new Adult Hunter divisions, it was Auletto and her own Primrose who claimed the Grand Championship title.

Finishing as the reserve in the 36-49 section was Katherine Bleich Kemp riding Mon Tresor.

In the Adult Amateur Hunter, 50 and Over division, Betty Oare, 80 of Warrenton, Va., on Sidenote was champion and in reserve was Lisa Rabon of Hershey, Pa., and Cascade.

In the Adult Amateur Hunter, 18-35 division, Amanda Hone of Wellington, Fla., on Intent was champion.