DEVON, Pa.--Michael Bragdell on Hilltop Farm's  Qredit Hilltop (Quaterback/Dream Rubina by Dream of Glory) won the FEI Grand Pix Freestyle* (CDIW) with a score of 72.995, a personal best score for Bragdell, at Dressage at Devon on Oct. 3. 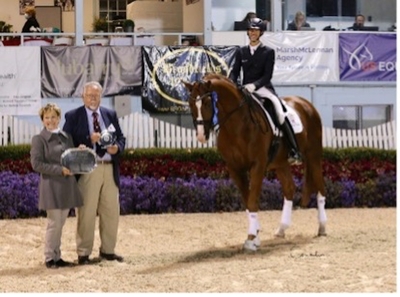 Qredit Hilltop has a long history at Dressage at Devon, debuting in 2009 as a yearling colt (under the name Perfect Qredit) in the Devon Breed Show.

Ten years later, he became the Grand Champion in the same show.

In 2009, Hilltop Farm bought Qredit from Michelle Coursin, an air traffic controller who boarded her colt at Hilltop.

“From the day he came to the farm as a yearling, we all felt he was something specia,l" said Bragdell. "He was so well behaved.”

He started Qredit Hilltop under saddle and has been working with him ever since.

COMMENTING on his win, Bragdell said, “It’s beyond cool. I had done Devon as a handler at the breed shows for twenty-some years. I was purely a jumper rider, and I never thought I’d be where I am tonight,”

“We just went in and had fun." said Bragdell. "It’s always fun when you do the freestyle. You just enjoy the music. And there is no other place like this.” Bragdell even prepares for his rides in a fun way. “I have a playlist that I use before I go in.” It includes the Beastie Boys, Abba and a flexible selection of other music.

“Right now, I’m just enjoying the moment," said Bragdell. "I’m really happy with how he has progressed. He is the first horse I have made from scratch.”

While he achieved his personal best score in last night’s performance, Bragdell says, “I’m still learning, but hopefully we’ll continue to build on this.”

Their next step is to compete in Florida, and Bragdell feels they are ready for more CDI-level tests.

She says Lesath loves his music, Puttin’ on the Ritz, and based on the audience’s reaction, they shared Lesath’s musical tastes.

Shannon Stevens and Ferrari (Special D x Bewaldina), an 11-year-old KWPN gelding, came in third, and in their first venture under the lights, they scored 70.990.

For the first time, Dressage at Devon offered the FEI Short Grand Prix to competitors for the Grand Prix Freestyle that was held on Saturday night.

Although the test is not as long as the FEI Grand Prix test, the FEI Dressage Technical Committee claims it is as difficult, and many riders and judges agree with this assessment.

Some think that because the movements are packed into a shorter time frame, the test may be more challenging for those who are less experienced.

The FEI, however, believes the shorter version makes dressage more entertaining and has the potential to achieve more television coverage.

The FEI Short Grand Prix* (CDIW) Qualifier for the Grand Prix Freestyle was won by Qredit Hilltop with a score of 67.132.

Tuesday, Sept. 29 was the start of the largest open breed show in the world, featuring the future stars of dressage.

Maureen “Mo”Swanson of Rolling Stone Farm in Slatington, Pa., is a familiar face at the Breed Show at Dressage at Devon.

Swanson is a judge for the Oldenburg Horse Breeder’s Society (GOV) on its yearly inspection tours, makes numerous tours to Germany and has extensive contacts and friends there and is on the Board of Directors of the Mid-Atlantic Hanoverian Breeders Association (MAHB), a successful regional breed club; she is one of their founding members.

She originated and has helped to organize their annual Fall Mare Show, and this year she has a number of entries belonging to her as well as her clients.

Her dam, Rheporter was Grand Champion at Dressage at Devon in 2011 and it looks like her progeny may be following in her footsteps.

“My feet hurt,” said Mo but with a big smile on her face. “I’m so excited to have done so well with a fourth generation of my breeding program.”

Additional results can be found at www.dressageatdevon.org.