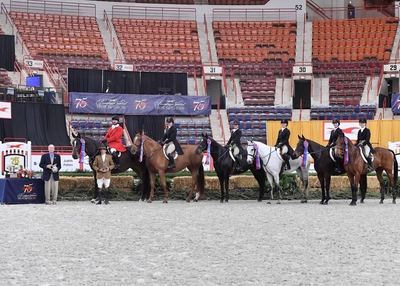 Elkridge-HarfordThe winning hunt was one of eight registered hunt clubs from across Pennsylvania, Maryland, and Virginia represented at Hunt Night, and throughout the evening, more than 50 riders participated in the offered Field Hunter, Sidesaddle, Hunter Under Saddle, and Hunt Team classes.

At the conclusion of the competition, it was the team from the Elkridge-Harford Hunt Club that had accumulated the most points throughout the evening’s events.

For the championship, the hunt, represented by Scarlet Davies, Delaney O’Neill, Lauren Mentzel, Robert Keller, Elizabeth Bridges and Ashton Williams, was presented with the Ralph A. Alfano Memorial Perpetual Trophy, donated by his family.

“Hunt Night gets all of the clubs together, and it’s friendly competition,” said Keller, who has ridden with the Elkridge Harford Hunt Club of Monkton, Md., for nine years. “Without doing this stuff together, hunt clubs are not going to survive. It’s important that we get together for friendly competition, and it gives us a chance to show off who has the best horses in the hunt field!”

EARNING the Hunt Night reserve championship was the Bull Run Hunt of Virginia, which also won the Hunt Teams class.

In the Field Hunters, 35 Years of Age and Under, the win went to Skylar McKenna and Sovereign Fund of the Mr. Stewart Cheshire Foxhounds.

For the win, McKenna was presented with the Max C. Hempt Perpetual Trophy, donated in 1999 by the Pennsylvania National Horse Show.

In the Field Hunters, 36 Years and Older, it was Marlene Allen who took the win on Vivan.

After being presented with The Chairmans Perpetual Trophy, donated by James Green and Irvin Naylor, for the victory, Allen also won the Hunt Night Leading Lady Rider Award.

As the lady rider who acquired the most points over fences and in the under saddle, Allen will have her name added to the “Polly” Gingrich Caswell Perpetual Trophy.

In addition to the competition, Hunt Night also featured the crowd-favorite Parade of Hounds, put on by the Radnor Hunt Club.