HARRISBURG, Pa.--Grace Debney of Hampden, Mass., won the Hunter Seat Medal Finals after a full day of competition on Sunday, Oct, 17 at the 75th Pennsylvania National Horse Show at the Pennsylvania Farm Show Complex in Harrisburg. 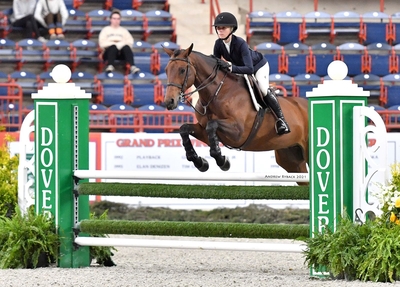 Grace Debny (Photo by Andrew Ryback)Following four rounds of testing, a field of 223 of the nation’s best junior riders was whittled down to the new USEF Hunter Seat Medal Final champion.

Zayna Rizvi of Wellington, Fla., riding Finnick placed second, in third place was Eleanor Rudnicki of The Woodlands, Texas on Travis Scott, and Skylar Wireman of Bonsall, Calif., on Eretto was fourth.

“It’s a huge honor to even be here at this show, so it’s such an honor to win,” said Debney, 17, who trains with Samantha Schaeffer and Kate Conover of Shadow Ridge and who earned the victory on Quimby.

“I came in here with really high hopes and really high goals, and I'm so happy that I was able to achieve them," said Debney. "It’s just one of those shows where everyone is here, and everyone is competing. I'm just so happy to be at the top of the list.”

FOLLOWING the first round of competition, judges Thomas Brennan, Emil Spadone and Geoff Teall narrowed the starting field down to the top 25 competitors, who returned to compete over a new course.

“I thought the first course rode very nicely and asked some good questions and separated them,” said Teall. “The level of riding was outstanding. We had some very naturally talented riders. We had some very disciplined, well-schooled riders. We had combinations of both. It was a great field to pick from for sure. After the first round, we had 13 riders, if not more, with scores in the 90s, which is amazing. Normally we would have five or six if we're lucky. So, it was really well done today.”

The field of 25 riders was then further narrowed down to the top four, Debney, Rizvi, Rudniki and Wireman, with Rizvi returning first to complete the test that included seven fences and required riding counter-canter to two fences, a halt, a hand gallop to the final fence, then finishing with a sitting trot to the in-gate.

“In the initial testing, I had to go first, so I was a little bit nervous about that, because I didn't get to watch anybody go,” said Rizvi, who had moved up from 12th into the top four and whose seamless test would ultimately move her from fourth into the top two. “I thought I did a really good job, answering the questions it asked – the counter canter, the halt. I was really proud of my test.”

“I was a little nervous to go last in the test,” shared Debney. “I got to watch Zayna go; she went beautifully. I kind of used her as my example. I didn’t watch the other two. I thought I had a really nice test, then I did make a mistake, but I finished my test and I made it happen to the best of my ability. That is something I am going to go home and work on that one mistake. Overall, I thought the test was nice, the jumps were all nice, and I finished it.”

At the conclusion of the test, the judges asked Rizvi, who trains with John Brennan, Missy Clark and Maggie Gampfer of North Run, and Debney to complete it again. but this time after having changed horses.

Debney and Rizvi had risen from sixth and 12th, respectively, from the first round.

Rizvi was the first rider to return in the second work-off and a miscommunication with Quimby at the first fence unfortunately resulted in rails down. She rebounded to have a solid remainder of the round to finish on a high note.

“Overall, I learned a lot about Grace’s horse, which I thought was really cool. I have always wanted to ride him,” Rizvi said of the second work-off round. “Even though it wasn’t the best round of my life, I did learn a lot from it. I am going to take that home with me and I’m going to continue to work.”

Debney entered the ring last. She had a bobble with getting the second counter-canter with Finnick but laid down an impressive round on an unfamiliar mount to claim the win.

“They were both so consistently good, and there was so much movement from round one to round two to the test that we felt Rizvi and Debney had earned, and both deserved, an opportunity to duke it out themselves," said Teall. "They had attained that level where they were so skilled and on such good horses."

“I think the longer story here though is you're seeing the depth of our bench in equitation getting so vast with so many good rounds, all the high scores Geoff was talking about, and just how competitive it is,” said Brennan. “Your testing has to get more creative and without being gimmicky. This seemed like an opportunity to let these two real stars of the sport today come out and give it another go.”

At the end of the final test, it was ultimately Debney who will have her named added to the Adrian Van Sinderen Memorial Perpetual Trophy.

Debney said the relationship she has with Quimby as part of her success.

The top three also received EquiFit D-Teq boots, and, as the winning trainers, Schaefer and Conover received a $500 gift card to Dover Saddlery and a keepsake trophy.

Third: Eleanor Rudnicki of The Woodlands, Texas on Travis Scott