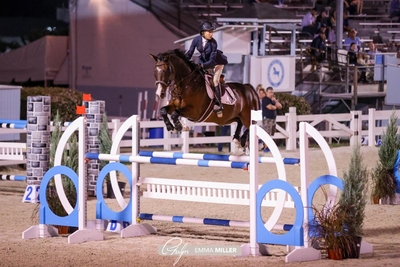 Abigail McArdle on Victorio 5, held an early lead in the class, finishing in a speedy 69.688 seconds with just one rail down.

She led until Chapot entered the ring on her second mount of the night, Diarado’s Flying Dutchman, who set the time to beat, going clean in 67.977.

Going shortly after Chapot, Summer Hill on La Belle SCF tried to catch Chapot, but she finished just a second short, clean in 68.704 seconds, to take over second.

Cassandra Kahle on Emeraldo then finished clean in 77.579 seconds to place third.

“I’M STILL trying to get to know his horse because last year, with Covid, I didn’t get to do a whole lot with him," said Chapot. "This is his first time at Devon and I was unsure about what he was gonna think about being under the lights. I’m sure he’s never been under lights like this before with a crowd and I thought he remained very focused, he jumped even better than yesterday. He really took to the ring and I think he was really starting to enjoy himself and let loose even more than before.”

“I saw that people were trying to navigate the course really fast and it’s always a bit of a shock to the horses with the lights," said Chapot. "Everything just looks very different with a crowd especially going towards the fair area. Any jumps that are going in that direction, they tend to back off and get a little spooky. I think towards the end of the class people decided to take a little more time and just really try for the clear round. Once some of the horses are more acclimated to this environment than you can put the pedal to the medal, but I think for tonight you had to be a little more careful.”

Matz was the first to go in the class, but her time held up for the win.

She also rode last in the class on Jillz, to go clean in 62.539 seconds,to also finish third place.

On Friday morning, Meredith Till on Will Scarlet, owned by Neal Shapiro, was clean in the jump-off in a time of 38.799 seconds, to win the class as well as the Thoroughbred Jumper Championship.

Will Scarlet was purchased by Hay Fever Farm at an auction and has become a trusted and talented jumper during his time there.

Able to take riders of multiple skill levels around a course, the gelding will also be piloted by another rider in jumper classes this weekend following his Thoroughbred division championship win.