BRIDGEHAMPTON, N.Y.--Ireland’s Nicky Galligan won the $75,000 Hampton Classic Grand Prix Qualifier at the end of a very close jump-off round, to emerge victorious by half a second on Friday, Sept. 3. 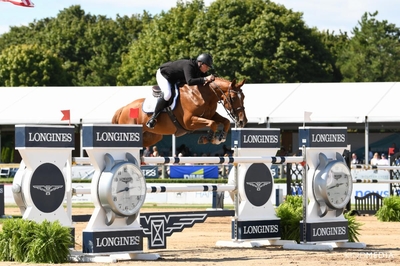 Nicky Galligan on Javas Miss Jordon (Photo by Kind Media)Ten out of 25 competitors returned to jump off in Friday’s featured class, with Schuyler Riley going first and setting a 31.830-second time to beat on Robin De Ponthual, and her lead held until Galligan rode his Javas Miss Jordan to a time of 31.320 seconds.

“I’m very proud to be here at such a prestigious show like this,” Galligan said. “I have to give a special mention to the horse show committee for working tirelessly to get us into this ring today, and I have to compliment how well the course rode.”

“Our intention was to go out and be competitive today, but not leave it all out there because we still have one eye on Sunday,” Galligan said. “I went early enough in the jump-off that I thought if I could go quick enough and put a bit of pressure on, I might get lucky and it would hold through the rest of the class. To be honest, I thought I was a little too conservative to the last jump and left the door open for another rider to beat my time, but thankfully my luck was in today.”

Rodrigo Pessoa placed third in a time of 31.950 seconds on Lord Lucio.

“MY HORSE is a very special horse to me and my family,” Galligan said. “She’s the reason I’m in the States. I came over as a boy with a dream to ride in the top level of the sport, and we’ve owned her since she was 4 years old. It’s incredibly exciting to produce her all the way through and have results like this in an esteemed company. These were all people that I looked up to and aspired to be like as a child, so it’s an honor to compete with them and especially to have a win.” 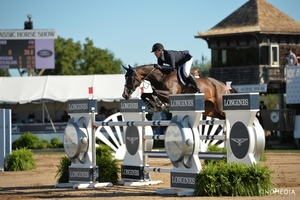 Ward shaved over a full second off Jonathan Corrigan’s time of 59.000 seconds.

“It’s always nice to win, and Blossom performed beautifully,” Ward said. “There’s been a monumental effort this week by the Hampton Classic and their entire management team. We had some issues with the turf and a year off with COVID, so the environment has changed. They really moved heaven and earth – literally – to be able to get us back to the Grand Prix Ring for the weekend on all-weather footing. I think it worked and we’ll have some great sport.”

“Jonathan had the unenviable position of going first in a speed class, which is always difficult,” Ward said. “And with the new ground, we weren’t 100 percent sure how the horses were going to react. I think the advantage of the order was a big deal.”

Adrienne Sternlicht was the only other rider to beat Corrigan’s round, finishing second in a time of 58.400 seconds on Lafayette Van Overis, and Corrigan finished third.

After his competitive placing in the Grand Prix Qualifier, Ward continues to hold the lead in the $30,000 Rider Challenge with a total of 378 points.

Pessoa is in second place with 260 points, and Sternlicht moved into third with 197 points.

The Challenge will be awarded after Sunday’s $300,000 Hampton Classic Grand Prix.