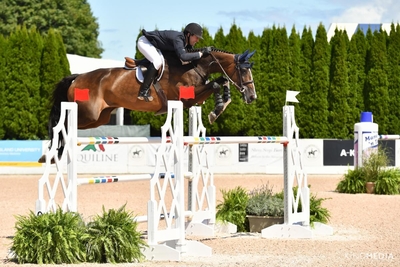 McLain Ward on Blossom Z (Photo by Kind Media)Ward's second win was on the 11-year-old Blossom Z in the $37,000 Hampton Classic Speed Stake on Thursday, Sept. 2..

Early in the class’s 40-rider lineup, six-time Olympian Rodrigo Pessoa of Brazil had the first clear round on Venice Beach, setting the time to beat at 59.41 seconds.

His lead held until Ward on Blossom Z  stopped the clock at 58.53 seconds, taking almost a full second off Pessoa’s time.

“I know Rodrigo’s horse,” Ward said. “It’s a very fast horse, although maybe not one with the biggest stride. Earlier in the class, I got to ride my younger horse for a nice, smooth round, so I had a feel for the course going in. Blossom’s a very fast horse naturally, and I thought that if I could just do a stride less than Rodrigo here or there, I might be able to nip him.”

“It was a fast class,” Ward said. “These ranking classes typically are, so that’s not unexpected. Blossom really performed well and was there when I needed her.”

Amanda Derbyshire of Great Britain was the only other rider to beat Pessoa’s time, riding Don’t Touch Du Bois to a speedy 59.00-second finish to place second in the class, with Pessoa ultimately finishing in third.

Derbyshire is second with 160 points, and Pessoa is just behind her with 140 points.

The Challenge, which awards $30,000 will be awarded Sunday following the $300,000 Hampton Classic Grand Prix.

Both speed courses were designed by Ireland’s Alan Wade.

“The course was all about turns, and I had a really fast, super careful mare that I own in partnership with Grace Debney and her Temple Equestrian,” Ward said. “She’s just a great little horse.”

Alessandra Volpi of Woodside, Calif., was second on Absolute Du Mio with a time of 62.950 seconds, and third went to Adrienne Sternlicht of Greenwich, Conn., on Shadowfax 111, in a time of 63.741 seconds.

Although four other horse-and-rider combinations had fault-free rounds, none could catch their time of 63.415 seconds.

“I’m very happy and excited to have won,” Colvin said. “I just went for a smooth, clear round. The course was nice and direct, and my horse felt incredible.”

Second place went to Ailish Cunniffe of South Salem, N.Y., who rode Carlotta 249 to a time of 64.951 seconds,and Pessoa finished third with a time of 65.842 seconds on Major Tom.

The first jumper class of the show was held on on Sunday, Aug. 29, the $30,000 Open Jumper Challenge, won by three-time Canadian Olympian Mario Deslauriers.

Setting the time to beat at 73.522 seconds, Deslauriers rode Emerson to the first of only two clear rounds in a field of 27 riders.

Carly Anthony of Redmond, Wash., on Heavenly W placed second with a time of 74.056 seconds as the only other one to jump clear.

“I was coming here mostly just to go around, not really thinking about the win,” Deslauriers said. “My daughter Lucy and I went to Europe for most of the summer. We were kind of in the Olympic spirit, both fighting for a spot on each of our teams. Sometime after June 15, I got my spot to represent Canada, and Lucy had a great summer in a couple of Nations Cups for the United States. This was our first show back.”

Fastest in the class was Ward, a team silver medalist in the recent Tokyo Olympics.

He rode Catoki to a blistering time of 60.960 seconds, but with a 4-fault rail on the second to last jump, the pair finished in third overall.