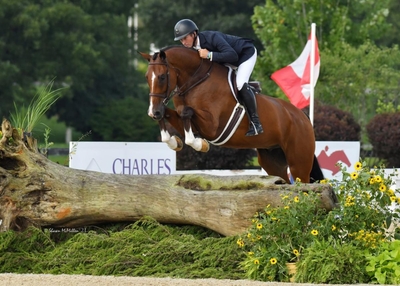 Hunt Tosh on Cannon Creek (Photo by Shawn MacMillan)Tosh, of  Alpharetta, Georgia, went into the Derby Handy Round in the top spot and held the lead, walking away with $52,646.65.

As the highest place pair from Saturday's Classic Hunter Round, Tosh and Cannon Creek were last to compete over Alan Lohman and Danny Moore’s track.

The 12-effort course had horses and riders using the whole Rolex Arena and included a trot jump and four high options.

Second-placed Victoria Colvin and El Primero had scratched and third-placed Scott Stewart had a bad fence on Hudson, leaving Tosh to win on a score of 606.

“When Tori had to scratch her horse and when Scott’s horse made a mistake, the nerves kicked in a little bit because I had a little bit of a gap in there and I’m like ‘don’t completely mess up, don’t fall off right now, this would be bad,’ but no he was great; it was a fun class to win,” Tosh said.

“MY HORSE is so scopey, he does the high options so easy,” he said. “I kind of walked all the high options and made my plan and stuck with it. I thought if I overthink it I for sure would make a mistake. It was a lot of trips to watch and I’m usually better off not paying that much attention and kind of sneaking in at the last minute and doing it. But I kind of stuck to my plan from the beginning.”

This was Tosh’s first time back in the winner’s seat at the Championships since his win in 2010 with Lone Star.

Moving up from 10th in the first round to take second overall was Samantha Schaefer of Westminster, Md., on Caristo, who finished with a 576.6 and $34,441.04, a solid collection for a rider who was not originally planning on competing and a horse that is new to the International Derby ring.

“We did the Green Hunter Incentive Championship on Thursday, and this was just a bonus," said Schaefer. "We weren’t even sure if we were going to do this class tonight. We were really happy with him yesterday; he finished 10h and I guess my expectations were to just kind of see how it’s going. My plan was to jump all the high options and it just kind of all happened. I thought he was with me the whole round and I really couldn’t have asked him to be any better. This is only his fourth derby.”

Boyd entered the ring for the Handy round in eighth and quickly moved up the leaderboard with a 571.5 overall.

The only rider to win the Championship on the same horse three years in a row, Boyd is no stranger to the top of the class.

“This is my fourth time being third and it was the most fun. On the podium, I was so excited. These medals, thank you guys; it made third almost as fun as winning,” Boyd said. “It’s fun for us hunter riders because we don’t get this opportunity, and this is the Olympics for us, so it’s a big deal.”

“It’s really cool to see that Hunt has another horse as cool as Lone Star because Lone Star was a horse of a lifetime, and that doesn’t happen very often,” said Boyd.. “When I saw Cannon Creek jump it was so much like Lone Star and it gives me hope that maybe I can find another Brunello in 10 years.”

The 3'0"/3'3" Championship featured three rounds of competition over three days, with the top 30 from the first two rounds coming back with a clean slate for the Championship Round.

Twain earned high scores throughout the competition, tying for third in the First Round and winning the Second Round.

Then Tosh's smooth and consistent Championship Round earned scores of 93, 89 and 94 to take the win with a final score of 276.

Tosh, who won the inaugural Pre-Green Hunter Incentive Championships in 2013, earned a total of $32,551.69 in prize money with Twain.

Scott Stewart of Fleminton, N.J., who is no stranger to the top of the leaderboard in the Green Hunter Incentive Championships, was Reserve Champion on Dr. Betsee Parker's Ackergill Castle with a score of 269.75.

Victoria Colvin rounded out the top three riding Karen Bruce's Mastermind, who was second place in the First Round, and earned a final score of 267 in the Championship Round.