LEXINGTON, Ky.--Marilyn Little of Frederick, Md., maintained her lead in the Kentucky 3-Day Event 5* division on Friday, April 23 after the second day of dressage while Tamie Smith of Murrieta, Calif., on Mai Baum came close to matching Little’s historic leading CCI5*-L dressage score with an impressive mark of her own as her 21.8 placed Smith in second just 0.1 points behind Little and RF Scandalous heading into Saturday’s cross-country. 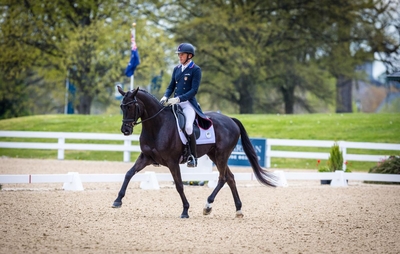 Boyd Martin on Tsetserleg TSF (Photo by RedBayStock)Boyd Martin 0f Cochranville, Pa., has all three of his CCI5*-L entries into the top 11: Tsetserleg TSF is fourth on 25.4, On Cue is seventh on 27.0, and Long Island T is equal 11th on 28.2.

The last ride of the day, Buck Davidson of Unionville, Pa., on Carlevo, stands sixth place with a 26.7.

“That was definitely his best performance. He was such a showman,” Smith said. “He was actually really nervous. It was kind of cute because normally he doesn’t really get nerves. He kept blowing his nose and wasn’t eating today. I think he knew it was a big day. He went in the ring and it was absolutely stunning. I almost cried. It was just so nice to have him go in there and have such a good performance.”

“Lexus” was previously ridden through the CCI3*-L level by Alex Ahearn, and the offered the ride to Smith in 2015, and they went on to win the Three-Star Eventing National Championship the same year.

“HE'S A phenomenal creature," said Smith. "I had always admired him from afar. Now I get chills every time I think about that night when Alex offered me the ride. It changed my career. It took me some time to get to have a partnership with him because he was very much Alex’s horse, but I feel like he’s a hand in the glove now. We’re such good friends.”

“It was a choice we made," said Smith. "We had high hopes for him going to the Rio Olympic Games and we chose not to do a Five Star until now. Looking back I don’t know that I would do that again. We really wanted to have a chance to do an Olympic Games and that just happened to be four years later — or five because of COVID. We are here. We are ready.”

It has been commonly said the course looks less intimidating the more it is walked, and Smith believes it is well suited to her mount.

“He is a big, galloping type horse. He’s also quick and naturally fast and rideable,” Smith said. “When I first walked it there were a couple of combinations I was quite worried about but they look really rideable now. I feel like I have a good plan. I feel ready. The plan is to not leave anything on the table, so here we go.

Oliver Townend of Great Britain has two in the top five, sitting in third place with Cooley Master Class on 24.1 and in fifth place with Ballaghmor Class on 26.5.

The top 20 CCI5*-L competitors all ­­­scored under 30.0, making for an interesting and competitive Saturday’s cross-country.

It will be live streamed on USEF.org beginning at 8:30 a.m.

SMITH on EnVogue also leads the CCI4*-S following the dressage phase after scoring a 25.4 to break Thursday’s three-way tie by producing an accurate, flowing test despite a challenging warm-up, where the mare was spooking at a video camera. 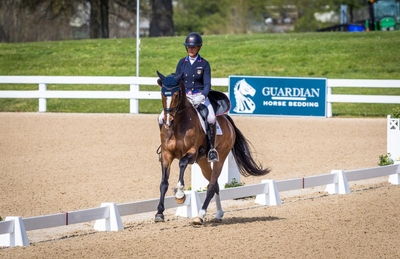 Tamie Smith on EnVogue (Photo by RedBayStock)“I thought I had no chance,” Smith said. “But she went in and was super. She was really rideable and expressive. She really showed off. I was proud of her.”

Smith originally entered the 16-year-old Hanoverian mare in the CCI5*-L but reconsidered in the lead-up to Kentucky.

“This spring she came out and she just wasn’t her attacking self out on cross-country,” Smith said. “I really want to set the horses up for success, and there wasn’t a lot of success. I had to stop and reflect and think ‘is this the right thing for her?’ I think she needs to do another Four-Star long before maybe doing Maryland’s CCI5*-L.”

Canadian Colleen Loach on Vermont scored a 27.0 to sit in second place after dressage.

“Monty is a giant." said Loach. "He’s 18.2 hands but he’s scared of everything and very emotional. We’re starting to develop a really strong partnership. He’s a lovely, talented horse, and I’m really looking forward to the future with him.”

Looking to tomorrow’s cross-country course, Smith and Loach agree on the difficulty of the course but are nevertheless looking forward to the challenge.

“Monty is green to the level but he’s been very dependable so far,” Loach said. “He’s really rideable and has a great big galloping stride. He’s not strong so there’s not a lot of setting up that has to be done. He’s really a joy to ride. He looks for the flags. As long as he comes out like normal I’m hoping for a great ride.”

“Kentucky really invites them to open up and gallop, and Derek [di Grazia] is such a genius course designer," said Loach. "I’m looking forward to getting out there.”

Thursday’s leaders are now in a three-way tie for third place: Smith on Danito, Doug Payne on Starr Witness and Liz Halliday-Sharp on Cooley Moonshine sit on equal 28.1.

The CCI4*-S was originally scheduled to run cross-country on Saturday morning, but the timetable has been reversed due to the expected weather conditions.

The CCI5*-L will go cross-country first and the CCI4*-S will start in the afternoon.

Visit the Virtual Experience Webpage to find all the information you need for the 2021 LRK3DE.