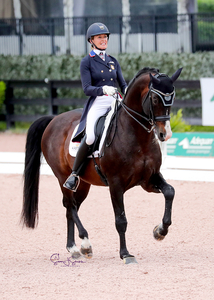 Charlotte Jost on Kastels Nintendo (Photo by Susan Stickle)Jorst rode to a “Pirates of the Carribean”-themed freestyle, highlighting the horse’s big movement and showcasing his talent for the piaffe and passage.

“It feels great to hit a personal best, but to be honest, now it has me wanting more,” said Jorst.

“I’ve had lessons with Debbie McDonald this week, and that has really seemed to help me finesse those little things that needed to be finessed," said Jorst. "He was great in the Grand Prix, so yesterday I just walked him out. Today, I just warmed up a little beforehand to keep him fresh. He loves it, and he really loves his job.”

“This season I’ve been here longer than I ever have in the past,” she said. “There’s just so much kindness here. I feel like in this community in Florida is one family. For me, this has been an incredible season full of personal growth and friendships. It’s really been an incredible season for me on all fronts, and it never ceases to amaze me how incredibly supportive this community is.”

Jorst also has several talented up-and-coming horses in her string, but said that Nintendo will always have a special place in her heart.

“HE'S 18, and I literally pray every day that I’ll have another season with him," she said. "I’ve been so fortunate. I was racking my brain all night what I was going to do when I get home and what would be the best rest period for him and all of that, so I spend a lot of my mental energy on making sure that he is okay because he is so dear to me. I just want him to continue to feel good. I feel very fortunate and happy about my upcoming horses, but Nintendo still has a very special place in my heart.”

Second place in the FEI Grand Prix Freestyle CDI3* was Dongseon Kim of Korea on DSK Belstaff, on a score of 73.665 percent, and third went to Mikala Munter on Salsa Hit with 72.530 percent.

Kim also won the Intermediaire I Freestyle CDI3*  on Lord Nunes, who earned a 72.850 percent.

Second was Elaine Cordia Van Reesema on Fellow, on a score of 70.075 percent, and third was Spain’s Paula Matute Guimon on Legacy’s Walentino, with 69.150 percent.. 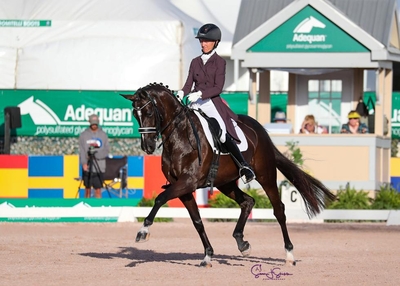 Tarjan, who currently has four horses competing at the Grand Prix level, was first on her own Serenade MF,  with 76.008 percent.

Tarjan was also second with Harvest, riding to a 72.938 percent.

“I am really happy with both of them,” said Tarjan. “They were both very good today and did their jobs, so I’m proud of them.”

Yesterday in the warmup class, Tarjan earned first on Harvest and second on Serenade.

“I wasn’t expecting the flip, yesterday Harvest won the warmup and Serenade was second, so it’s interesting,” she said. “I have a few horses at Grand Prix and everyone asks me, ‘Oh, which is the best one?’ and I never know the answer. They’ve never really gone head to head until this weekend and they each have their strengths and weaknesses, so it is interesting to see this outcome.”

Tarjan has had Serenade MFsince she was a foal and said that she was bred in the USA.

“I bought Serenade as a foal from Maryanna Haymon, so she was bred here in the USA,” she said. “I got her when she was 6 months old, she won the four-year-old championships at Festival of Champions in Chicago, and she had decent placings at the five-and-six-year-old years. She’s been doing all of the Grand Prix movements for a while now. She is really easy to train, so by 6 she could basically do everything. It’s fun for her to be old enough to be able to show it off now.”

“I bought Harvest at the end of his 3-year-old year, and he’s been a lot of fun to build up, too," said Tarjan. "He didn’t come along as quickly as Serenade. He’s a much bigger horse so physically it was more of a ride for me, but now that he’s well-trained it’s lighter. But it took a while to get there.”

“I think a series like this is fantastic,” she said. “I’ve done the developing grand prix classes before, but this is great because the young horses don’t have to go against the CDI horses, and they get the exposure in a bigger environment and in front of a judging panel that you wouldn’t get anywhere else without having the pressure of the CDI.”