Canadian Moreira Laliberté won the Grand Prix at the Festival on Feb. 20 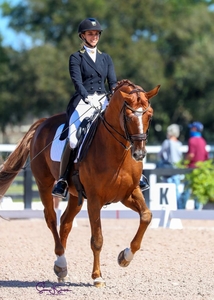 Naima Moreira Laliberte on I Do Kiss (Photo by Susan Stickle)Moreira Laliberté scored 74.347 percent,a score that the 24-year-old was happy with after a year away from competition, moving into the upcoming five-star week at AGDF.

“This was my first time in the show ring since last year,” said Moreira Laliberté. “I was grateful and happy to be back in the ring with ‘Kiss’ at Grand Prix. I was happily surprised with the score, and I think our ride went super well. He stayed with me the whole way and was very focused and was willing to give his all. He’s a big stallion; he’s a big horse to move, but when he goes in the ring he tries his heart out, and I really appreciate that side of him a lot. He’s also got huge changes and is very expressive in them. I think he also is the kind of horse that steps in the arena, and he wants to show off he’s got that presence. He’s a performer.”

Moreira Laliberté, who was on the gold medal team at the 2019 Pan American Games for Canada with her mount Statesman, said that she is also vying for a spot on the Olympic Team for Tokyo this year alongside her other barn mates who all train under former Canadian Olympian and now U.S. rider and trainer, Ashley Holzer.

“I declared both of the horses,” said Moreira Laliberté, “so, we’ll see who can qualify for the team. I think they’re both horses that could be strong contenders for the team. They’re two completely different horses to ride, they’re not alike, and it’ll be interesting how it pans out.”

MOREIRA LALIBERTE, who is primarily based in Montreal, has been in Wellington since November, training with Holzer and team.

“I owe a huge part of my success to Ashley,” said Moreira Laliberté. “She really took me under her wing and brought me to another level in the sport. She always brings a positive attitude which I really appreciate. It creates a great environment to learn in. I come out of the ring and even if it’s a ride that didn’t go according to plan, she’ll always find a positive piece of it and breaks it down for you in a way that’s constructive and incredibly helpful. She is a mentor in so many aspects, how she balances her projects, her family, and her sport, and how she shows up every day, passionate about what she does. It’s so inspiring. She cares about her students and horses, and her teaching is just wonderful. It fits so well with myself and my horses, and that’s essential.”

In Friday’s FEI Grand Prix Special , Sabine Schut-Kery on Sanceo had a career-high score in a Grand Prix/Grand Prix Special of 76.808 percent in her first competition since arriving in Florida in January to campaign for a spot on the U.S. Dressage team for the Tokyo Olympic Games.

On Sunday, Alice Tarjan won the FEI Intermediaire II on Harvest to earn her invitation to the $15,000 Young Horse Grand Prix Series Finale with a 72.573 percent.

Second place honors were awarded to Karen Pavicic of Droatia on Totem, with 69.632 percent.