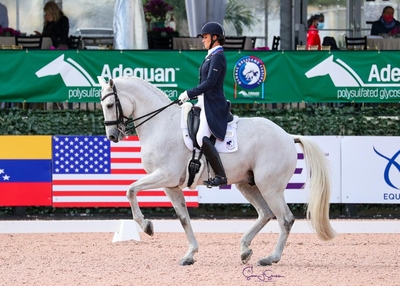 Adrienne Lyle on Harmonys Duval (Photo by Susan Stickle)The Festival hosts 10 weeks of international and national dressage competition until April 4, and free live streaming and on-demand of select classes are available to view at GlobalDressageFestival.com.

“I was quite happy with him,” said Lyle. “He’s a little more nervous than I was anticipating. I don’t know if it’s the cooler weather or what, but he was a little on edge, which is interesting because we’ve shown here plenty of times before. There was a bit of a different horse in there today. We lost a few points in our piaffe and passage, which were lacking a bit of harmony and elastic energy, and that can be such a highlight for him. Now we take this, and we move on to the Grand Prix Special. That’s a test that really counts for us, but this was a good starting place.”

The gelding has now marked six wins in his last 13 starts, and Lyle hopes to continue on and refine their work this season.

“With him, this is his second year at the Grand Prix," said Lyle. "He knows his stuff now, but we’ve been trying to polish it all up. We’ve done a lot of halt rein-back, a lot of cantering and halting, and just a lot of work with halts because he’s not a huge fan of them, so we’ve worked on those moments where he could possibly get distracted and lose points.”

“WE'RE FOCUSING on the Special with him this year," she said. "We’ve chosen not to focus on the Freestyle or World Cup Qualifiers in hopes of making the short list to go to Europe with him. We have a wonderful group of owners who are supporting us, and we’ll just keep on enjoying the season for now.”

Despite plenty of training time at home due to the global pandemic, Lyle is excited to have Duval back in competition, but said that the break wasn’t as beneficial for him as it was for others.

“We had time to train at home due to COVID, but it wasn’t a big advantage because he is a horse that needs to be exposed, out, and doing something,” she said. “To sit at home all summer, it was a bit difficult to get his mind back into it, but his strength in the collection work is continuing to improve. His overall rideability has always been the biggest focus with him because he can get a little distracted.”

Second place in the class was Susan Pape of Great Britain on Harmony's Eclectisch with a 70.522 percent, and in third was Jennifer William on Millione on a score of 70.456 percent.

Anna Marek on Felissirana won the FEI Prix St. Georges CDI1* with a score of 70.323 percent.

Raul Corchuelo of Columbia on Maverick was second on 69.412 percent, and Karen Lipp was third on Infinity, scoring a 68.353 percent.

OLIVIA LaGOY-WELTZ on Rassing’s Lonoir won over an impressive lineup of riders on Jan. 15 in the second day’s FEI Grand Prix CDI-W. 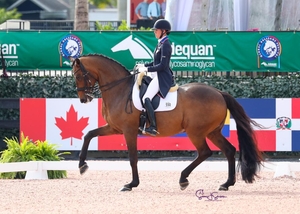 Olivia LaGoy Weltz on Rassings Lonoir (Photo by Susan Stickle)In their first international competition since February 2020, LaGoy-Weltz and the 17-year-old Danish Warmblood gelding scored 73.978 percent to win over second placed Pape on Harmony's Don Noblesse, who scored 73.022 percent, and in third was Yvonne Losos De Muniz of the Dominican Republic on Aquamarijn, with a 71.717 percent.

“I’m really happy with how this has started off,” said LaGoy-Weltz. “We went out and rode in a national competition last week, and it was harmonious, but plain. It served its purpose to go out and ‘shake out the bats,’ and that’s part of the strategy. We’ve been trying to push it to the next level with Lonoir. I’ve kept him quiet for so many years, but there is a lot of horse in there. The goal was to push that more today. and we did, but we had a few costly bobbles in the zigzag and in the pirouette. We can fix that next time. I know that coaches Debbie McDonald, Ali Brock and Charlotte Bredahl say that he has never looked better. That’s a good place to start, so we want to keep going from there.”

“After everything came to a screeching halt last year, we finished in such a good place and were like, ‘Now what?", she said "With a 16, coming 17-year-old horse, we didn’t want to keep him in that spot all summer long, so we did a lot of working on things but also a lot of hacking and hills, with a goal to ramp back up slowly down here. So far it seems to be going okay!”

As she prepares for the remainder of the season and beyond, LaGoy-Weltz is planning accordingly with her team, including coaches Debbie McDonald and Allison Brock.

“The plan is to keep options open and pick what is right for Lonoir,” she said. “You never know what is going to happen these days due to COVID, so we are keeping it open. We will switch over to some Grand Prix Specials eventually. We just have to determine whether it's for the four star, or if we are going to wait for the five star, and then decide what we really want to do.”

She concluded, “Ali stops by in the afternoons once a week, and we take that and check in with Debbie, so Debbie is very much still a part of our work. They’re both amazing and work so well together. Everyone ultimately wants the same thing: more up, more sit, more hind legs, more electricity, more perfection!”