WELLINGTON, Fla.--McLain Ward began his winter season in a familiar way by winning the $75,000 Grand Prix at the 2021 Winter Equestrian Festival (WEF) on Jan. 10 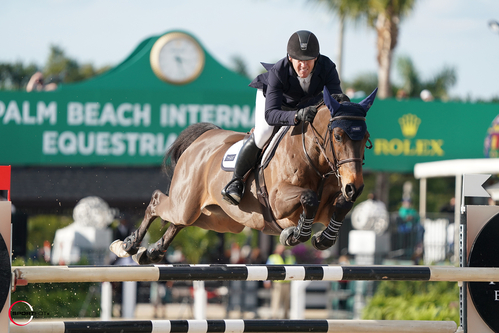 McLain Ward on Catoki (Photo by Sportfot)Ward and Catoki topped four speedy entries with the only double clear effort of the day to claim the victory.

Ward was one of four from a field of 30 entries, and then he set the pace in the jump-off with a clean round in 36.846 seconds.

Last to go in the jump-off was Canada’s Erynn Ballard, with two big wins under her belt over the past week, but a rail at the second to last fence landing her in second in 36.994 seconds on Kamilla D.

Grace Debney, 16 of Hampden, Mass., was the first clean on Zarina de Vidau in just her third career Grand Prix.

Debney was the first to return in the jump-off as well, finishing with just one knockdown in 37.126 seconds to place third.

Nick Dello Joio on Gelvera had four faults in the jump-off, and with a time of 37.652 seconds, finished fourth.

FOR WARD, the victory with Catoki was a positive step after a difficult round Thursday’s WEF Challenge Cup Premiere Round.

“You just try to slow him down sometimes,” said Ward. “He goes every time to win. Sometimes when you always go to win the class, it can blow up a little bit once in a while. He’s been a great campaign winner for us and so competitive. I felt like if I rode well, he would perform well today.”

In most cases, Ward sticks to his own game plan but after a fiery start to the week by Ballard, her success crossed his mind.

“I’ve actually come behind her in both jump-offs, and I think tried a little too hard to beat her,” he said. “I thought about that a little bit last night, actually. Catoki, he’s either going to win or be close, particularly at this 1.50m level. He’s a real tiger.”

“I felt so nervous today, more nervous than any other day this week because I felt like everyone was watching and I had to be good,” Ballard said. “My room for error was very small, but she made the first round so easy for me. In the jump-off when you’re following McLain, you have to try. She’s green, I’m going fast, and fast and one down kept me second. So, there’s really nothing more I could ask of her this week.”

“I had a good week two years ago, at Longines Masters in New York," said Ballard. "I won the speed challenge and was third in the grand prix, but you never forget weeks like this. You know that you’re not going to have them every time. You certainly can’t take them for granted.”

With her two wins earlier in the week and her second in the Grand Prix, Ballard won the first Martha Jolicoeur Leading Lady Rider Award of the 13-week 2021 Winter Equestrian Festival.

It's an honor to win Martha's Leading Lady Rider Award, especially because Martha is a family friend," said Ballard, 40, who operates Looking Back Stable with her parents, David and Sandi Ballard. "I think it's so nice that she offers this award in the sport; it's certainly an honor. Even if I didn't win the Grand Prix I still won something! It gives me something to talk about."

For Debney, it was also a week filled with success including a win in Sunday morning’s $10,000 Show Jumping Hall of Fame High Junior Jumper Classic, followed by her third-place finish in the Grand Prix.

“It definitely has built up my confidence,” said Debney. “I didn’t have such a great round early on Thursday in the WEF Challenge, but I think that really honestly helped me prepare for this class a little bit because I don’t like to come in too confident. I think me and this horse’s relationship has come very far. Last year at WEF, I was jumping low juniors. We’ve definitely come a long way so it feels really good that we’ve done so well today.”

Ward is delighted with all the up-and-coming United States show jumping talent, much of which he has had a hand in.

“It’s phenomenal,” he said. “It’s phenomenal for the future of the sport. It’s very rewarding for myself. I’m actually a little bit involved with Grace’s situation. Lillie Keenan, Adrienne Sternlicht, Lucy Deslauriers; I have a pretty incredible group of young ladies around our operation that I hope are learning, benefiting, and flourishing with our support. I always tell them, as much as they get out if it, I also find energy from working with them and seeing their ambition and young view of the sport. It keeps you hungry.”