WELLINGTON, Fla.--Irishman Darragh Kenny on Scarlett Du Sart Z on Dec. 20 continued his winning streak at the Palm Beach International Equestrian Center as the fastest in the $25,000 New Year’s Grand Prix class of 41 entries from 12 nations. 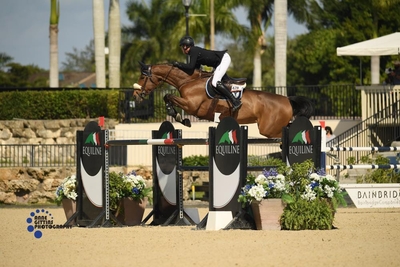 Darragh Kenny on Scarlett Du Seth Z (Photo by Anne Gittins)There will be one more show before the New Year, and then the 2021 Winter Equestrian Festival will take place from Jan. 6  to April 4.

“I’ve had Scarlett Du Sart Z since she was 6-turning-7." said Kenny of the 13-year-old Zangersheide mare. "Teddy Vlock owns her; he bought her as a 6-year-old, and we’ve been producing her and bringing her along the whole time. I think a lot of her. She’s a very, very good grand prix horse. She didn’t do much this summer, and I wanted to get her fit and ready in the fall for the bigger shows after Christmas.”

“I know she has a massive stride, and she’s very, very careful," said Kenny. "I knew I could take a lot of risks with her, so I took one less stride in the first line, and I knew the last line would be easy for me to do the eight strides. She’s just such a good horse that it’s easy to go fast with her. I think that she has such a big stride and she’s so quick across the ground, so I think that’s where I got the advantage today.”

GRACE DEBNEY on Zarina De Vidau was clean in 39.07 seconds to place second place, and Tiffiany Foster of Canada on Vienna was third in 39.19 seconds.

Kenny has had a successful ESP Holiday Series circuit, having earned multiple wins on several horses, including three wins on Belo Horizonte.

The final day of the ESP New Year’s show began with the $2,500 High Junior/Amateur Classic, won by Alexandra Pielet of Highland Park, Ill., and Hyperbolics, clean in 28.67 seconds.

Second was Maggie Kehring of Woodside, Calif, on West Side River in 30.83 seconds, and Far Hills, N.J., resident Hunter Champey on Caprice was third, clean in 31.06 seconds.