Dominic Gibbs wins the Maclay Championship at the National H.S.

LEXINGTON, Ky. --Dominic Gibbs, 17 of Coloraado Springs, Colo., second after the first round of 255 qualifiers and the flat phase, moved up to first after the first test of 24 and remained there after the final test of the top four to win the ASPCA Maclay National Championship on Nov. 1 at the National Horse Show in Lexington. 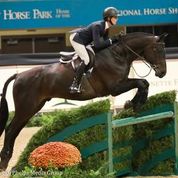 Dominic GibbsGibbs, who is trained by Stacia Madden and Max Amaya of Beacon Hill, was the only rider to place in all four major equitation championships, with top-five finishes beginning in fourth place in the Hunter Seat Medal Final, followed by fifth in the USEF Show Jumping Talent Search Finals - East and another fourth-place result in the WIHS Equitation Finals.

With his victory Sunday in Kentucky, Gibbs has added his name to a list of Maclay National Championship victors that include sport legends such as Bill Steinkraus, Frank Chapot and Bernie Traurig, as well as new age stars like Jessica Springsteen, Lillie Keenan and Victoria Colvin.

The National Horse Show has been the longtime host of the Maclay National Championship, which since 1933 has crowned a junior rider as the champion, a distinction regarded as one of the highest in the equitation discipline, especially considering how many advance to successful professional careers.

Bobby Murphy set the courses for the Maclay, which was judged by Mark Jungherr and Emil Spadone.

THE MORNING course consisted of 15 hunt-inspired fences such as gaits, hedges, stacked logs and rolltops, plus a one-stride combination created out of racetrack fencing that proved to be one of the bogey tests of the day, and plenty of wingless jumps. 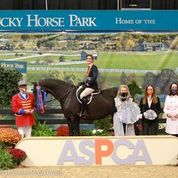 ASPCA  Presentation to Dominic Gibbs “I think the biggest thing in the first round were the lines after the one-stride," said Gibbs. "I know going to the last line there was a bit of an option going from five to six, and I have a big-strided horse and it was much better to do five strides. Stacia said ‘you need to get out of the one-stride and shape the five so you have enough room to power through those oxers.’ Other than that, I think that the course rode very nicely for me and having a big-strided and adjustable horse really helped.”

For the flat phase, 24 riders returned in two groups with Gigi Moynihan on top after going 36th in the start list.

Behind Moynihan, the remainder of the top of the callback list included Dominic Gibbs, Taylor Griffiths-Madden, Mimi Gochman, Alexia Rule, Sophee Steckbeck, Ellie Ferrigno, Skylar Wireman, Chase Finizio, Hannah Dodd and Hannah Hoch, Zayna Rizvi as the top 12, while the latter half of the standby list rode in another segment.

The flat phase included all three gaits; working, extended and collected sitting trot; simple change of lead to the counter-canter in front of the judges and walking to the line on a long rein.

After the flat phase, Gibbs was first, followed by Gochman, Griffiths-Madden, Steckbeck, Moynihan and Ferrigno, in that order.

Returning in reverse order of the judges’ preference, the top 25 competed over Murphy’s second course, which asked for a long approach to fence one at a hand gallop, two counter-canter fences, a triple combination and a forward 6-stride bending line.

“IN THE PAST I have had some issues with nerves, so I was just trying to keep myself calm and keep it under control to have the best round that I could for the second round," said Gibbs. "I think that really helping myself to calm down with breathing really helps a lot.” 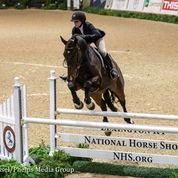 Reserve Champion Taylor Griffiths MaddenThe judges then asked Steckbeck, Moynihan, Griffiths-Madden and Gibbs, in that order, to complete a final work-off that consisted of cantering fences 4 and 5, trotting fence 6, cantering the original fence 8C and 9, trotting fence 10 and hand galloping fence 12 before leaving the ring.

“I think the biggest question of the work-off was going forward to collected, then forward to collected again, and that was kind of what they have been asking all day," said Gibbs. "I like that they continued the questions in that way. I think that the hardest part of the test for me was a forward seven strides, collect back to the trot, hand gallop, and having to come right out of the gate afterward."

Gibbs rode Cent 15, an 11-year-old Hanoverian gelding he trained with Madden, a former Maclay National Championship winner herself, to transition from a jumper to a successful equitation horse.

“Cent 15 is such an amazing horse," said Gibbs. "He has come so far in the time that I have had him. He used to be a jumper, so we have had to teach him to slow down and calm his brain, but he has been an amazing partner to have.”

“I was coming off of a few great rounds with this horse in the past few finals and I was really hungry to make it in the second round after a huge crowd of people in the first round," said Gibbs. "I knew that it was going to be more competitive than ever so I knew that I had to have a solid round and show myself well.”

“It has been quite the journey! I have ridden a bunch of different horses and gotten a lot of mileage out of that, and I can’t thank Stacia Madden and Max Amaya enough for giving me those opportunities and these different equitation horses." said Gibbs. “In 2021, I will continue to compete in the other three equitation classes that I can and hope for the best next fall.”

“You know what impresses me the most is that Dominic took that horse from a stallion in Europe, to being one of the top equitation horses in the country," said Madden. "He didn’t go out and look for a horse that was already winning in the classes, and together they have developed a real relationship and the horse really loves Dominic’s ride and Dominic couldn’t be more appreciative of having a horse like that. He has done a lot of the work! Other than a couple professionals showing him in some schooling classes here and there, and the kids getting switched onto him, Dominic has been the only one showing him in the equitation, so I really give him kudos for that.”

Griffiths-Madden was Reserve Champion riding her own Mac One III, and Moynihan was third riding Quantico  and Stechbecl rounded out the top four riding Itteville.

Equitation horses have become such a specialized group, specifically trained to perform tests like jumping off a counter canter, that many are owned by trainers who then give them to their top students to use for the season.

Many equitation horses have carried numerous different riders to top places in the year's championship classes.

“When we walked the course for round one, it was pretty clear that the one-stride across the middle was going to ride a little bit longer than it walked." said Madden. "You had some questions that kept being repeated - long to short, long to short - really showing that the kids had focus and control over the track."

“Going into the second round, I don’t talk much about keeping your cool," said Madden. "I try to redirect the focus onto focusing on whatever the test is. The second round had so many questions that it required a lot of focus. You had a counter-canter on each lead, which is always nice because it doesn’t favor a horse one way or another, and then the hand gallop jump always shows a little bit of brilliance and that you have good judgement, then adding a stride in the last line shows control. I try not to talk about nerves because I really feel that is a shot of adrenaline more than actual nerves, so if I can channel that into really focusing on the test then we don’t have to discuss the mental aspect.”

“I think part of my training technique is consistency," said Madden of Gibb's top finishes in all four championships. "I am always trying to talk about bringing your low average up a little bit, so the fact that he was so consistent, but wasn’t really getting frustrated with the fact he wasn’t winning because he had improved so much from the year before. That is what really kept his head in the game, or knocking on the door, and we just kept knocking harder and harder until somebody answered!”

The year before, Gibbs had won the 3'3 equitation championship at The National, so this year was a big step up for him.

"It was a long day," said Spadone. "There were many more than usual, and I think that the qualifying process was a little bit different this year. I think that they were all very excited; it was part of their dreams to show here so I think in that sense it was great. I think the course was challenging enough and, as I think you could see with the results out there, some people had a hard time. In general, the best riders rose to the top and they held their own the entire time. That top group was all excellent and Dominic was on Gigi’s tail the whole way. The flat work kind of slowed Gigi down and then she could not get back in after that. In the last round, they all came in and we felt like they were close. There was a little room if someone maybe wanted to move up. They all held their own but there was not enough of a change for us to change our order.”

“The course was perfect and the right amount of difficulty, but was still fair,” said Jungherr. “The top four were very close. We did have the option to make a change but we did not think that anyone took control enough to change the opinion from the second round. The top three were all a point to a point a half apart.”