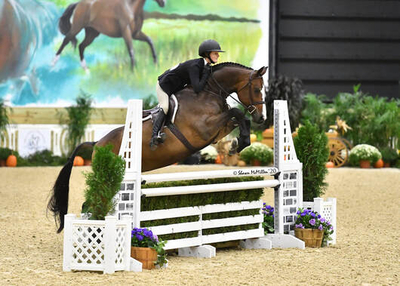 Schaefer and the 10-year-old Dutch Warmblood gelding won two of the over fences classes and the under saddle class to take the tricolor.
​“I had a really great last two days!” said Schaefer, who aged up into the amateur-owner hunter divisions this year following a highly successful junior career. “It’s a big deal to win a grand championship at Capital Challenge. They always make it feel important. The presentations are always amazing. It’s one of the best shows."

“I HAD TWO awesome horses this week,” said Schaefer, who is in her sophomore year at the University of South Carolina where she rides on the school’s National Collegiate Equestrian Association (NCEA) team. “Checkmate was awesome; never having really shown inside much, he was a star. He was supposed to be my sister’s amateur horse, but he took a little bit to develop and get together. I started showing him in Florida this year, and we’re figuring it out together. It paid off today.” 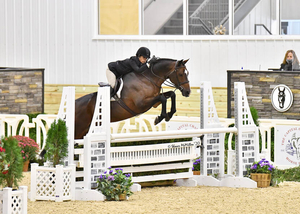 Dorli Burke and Charming (Photo by Shawn McMillen photography)In the Amateur-Owner 3’6” Hunters, it was Sutton Place’s turn in the grand champion winners’ circle.

Schaefer and her 12-year-old Hanoverian gelding finished first, second, and third over fences and first in the under saddle before clinching the championship in the Amateur-Owner 3’6” Hunter, 18-35 division, and ultimately the grand championship.

“Sutton Place has been in and out of our barn for a while, and my mom bought him this summer,” said Schaefer. “We’ve had some fun with him. It’s so awesome to have a horse that’s ready to win. He’s perfect.”
​
In addition to the dual grand championships, Schaefer also rode Checkmate and Sutton Place to wins in the $2,500 WCHR Amateur-Owner 3’3” Challenge and the $5,000 WCHR Amateur-Owner 3’6” Challenge, respectively.

“I already had a great day before I did the Challenges, so it’s a great added bonus!” said Schaefer. “Checkmate really jumped incredible over just about all of them and made some really nice efforts that were definitely helpful for my win. Sutton jumped incredible in the Challenge class and was really there for me. Both horses were excellent today. It’s awesome to win both challenges this year.”

In the Amateur-Owner 3’3” Hunter, 36 & Over division, the championship went to Jaime Auletto of Tabernacle, N.J., and Idolize.

In the Amateur-Owner 3’6” Hunter, 36 & Over division, Dorli Burke of Salisbury, Md., won the championship aboard Charming.

Burke and Charming also earned the EMO Amateur-Owner 3’6” Trip of the Show award with a score of 87.

“He’s a great horse,” Brungess said of Levianto, who she has had for six years.. “He tries so hard and he puts up with me – I’m an amateur, I make a lot of mistakes. But it finally all came together today. He was on his game and I was on mine.”

“Capital Challenge is always a terrific show,” she said. “I’ve struggled at this show in the past so I’m really happy that I finally rode my horse to his potential today.”