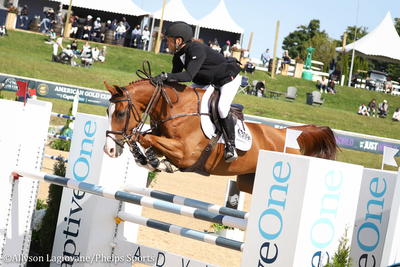 Kent Farrington on CreedanceNormally held in Massachusetts as a one week competition, the Gold Cup moved to Michigan because of Covid 19.

The international competition had 66 entries from 12 nations, 11 of which were clean to move on to the jump-off.

Seven were clean in the jump-off, with Farrington emerging victorious.

NICK GRANAT'S jump-off course featured a series of rollbacks and long galloping straightaways that offered a chance to turn in blazing times.

First to go, Molly Ashe Cawley on Adamo laid down a quick ride in 35.60 seconds, but her lead only lasted two rides as Farrington and Creedance toured the course with precision and speed, tripping the timers in 34.88 seconds to claim the lead.

The final class of the two week competition is the $213,300  American Gold Cup Grand Prix CSI4* on September 13.

“Creedance is an exceptional horse," said Farrington. "He’s just a real winner. He wins year in and year out. You really saw his heart today in the jump-off. I turned very short to number two, and he basically jumped it from a standstill. He is such an amazing horse, he can win anyway. I think he is an incredible athlete and I am very proud of him today.”

“It was a great win today, and I’m happy to be a part of that list," said Farrington. "The trophy is about the same size as me so I’m using all of my strength here to hold it up! I’m glad to leave with a win today.”

“In the jump-off, from one to two I planned to operate medium speed and to keep rolling through my turn, to never break my rhythm through the vertical so I could get the five strides in the line," said Farrington. "The footing slipped at fence two so I had to jump it from a standstill. Like I said, Creedence is an incredible athlete to jump it like that at that kind of distance. I did the six strides because I thought the five strides was totally out of bounds, then after that I thought I would let him run, and that’s his natural speed. I just took all of the last fences out of stride. The last one was an option in six or seven strides, but for me it was seven. His ground speed is so fast that leaving one out is not a necessary risk, so we did seven strides there and got away with the win.”

“In difficult times you are seeing great riders here, and I think it’s great for the area and great for the sport," said Farrington. "I thought it was an exceptional course today because it had a real big-level feel but it wasn’t at full size, and I think that’s why there weren’t so many clear. Nick Granat did an amazing job with the courses today and it showed with the field of top riders in the results.”