BARCELONA, Spain--Multiple cancellations continue, with the Nations Cup Finals in Barcelona and the American Eventing Championships being the lastest victims. 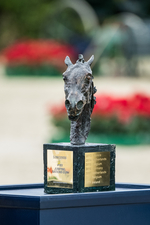 The cancellation of the Nations Cup Final in Barcelona was a joint-decision taken by the International Equestrian Federation, the Spanish National Federation and the Foundation and Board of the Real Club de Polo de Barcelona, longtime host of the Final.

The Barcelona Final was scheduled to be held from Oct. 2-4.

“We have looked at every scenario, including potentially running the Longines FEI Jumping Nations Cup Final behind closed doors without spectators, but the combination of the situation in Catalonia and the ongoing international travel restrictions has meant that we have unfortunately been forced to jointly agree that regrettably this year’s Final cannot go ahead in Barcelona, the risks are simply too great”, FEI President Ingmar De Vos said.

“When we announced changes to the rules for the Final back in April, we were cautiously optimistic that even if the series fell victim to the pandemic, we would be able to save the Final in Barcelona, but sadly that has proved impossible.

“OF COURSE, this is devastating news for everyone involved, not least the athletes that were hoping to compete at the Final, to our hosts in Barcelona and of course to our Top Partner Longines, but health and safety have to be our top priorities. While we are all very disappointed now, we very much look forward to returning to Barcelona for the Final in 2021.”

The rule changes for the 2020 Final announced earlier this year when the pandemic first started to impact the FEI Calendar, meant that 22 nations would have been invited to compete at the Final in Barcelona (2-4 October): 10 from Europe, three from North America, including the United States, two from South America, two from the Middle East, two from Asia/Australasia, one apiece from Africa and Eurasia, plus the host nation Spain.

THE UNITED States Eventing Association and Equestrian Events, Inc. made the extremely difficult decision to cancel the 2020 edition of the USEA American Eventing Championships.

The USEA Board of Governors weighed every option, but ultimately voted not to proceed to host the national championships due to the health and safety concerns of holding a national competition during the COVID-19 pandemic.

"Canceling the AEC is devastating for so many that have worked so hard to get to this point," said USEA CEO Rob Burk. "With riders coming from 41 states we could not ignore the geographic pull of this event and the implications of that. The immense amount of uncertainty caused by recent cancellations of similar-sized events at the Kentucky Horse Park weighed heavily on the USEA leadership.”

“If the AEC had moved forward I am confident that our team led by EEI, Mary Fike, and the USEA Staff would have put on a spectacular competition in as safe an atmosphere as is possible. Ultimately though the inability to guarantee that the event wouldn't be canceled by regional governments or other authorities left too much uncertainty. By canceling before the closing date for entries we are hopeful that riders can reroute to their local events which desperately need their support and are working incredibly hard to hold safe events. Over the next month, the USEA Board of Governors will look into the qualifications for the 2021 AEC to see what can be done for those that worked so hard to qualify in 2020."

We have been notified that three additional individuals have tested positive for COVID-19 after attending the Kentucky Summer Classic for a total of seven reported cases.

The majority of reported cases are associated with one barn and none of the individuals have returned to the facility.

This is a decision not taken lightly and we are mindful of the negative effect this will have on exhibitors' plans and schedules, but feel this is the only way to ensure a safe outcome for all.

No fees of any kind have been charged to anyone who has entered the shows.

Exhibitors do not need to take any action with regard to the show office and all entries will be canceled.

We hope that moving forward our exhibitors and members will place their safety and the safety of others above all else during these trying circumstances.