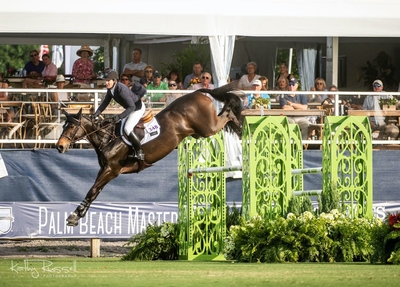 McLain Ward on Noche de Ronda (Photo by Kathy Russell)Fifth to return in the jump-off, Ward’s time of 37.86 seconds was enough to surpass Ireland's Billy Twomey on Kimba Flamenco, who placed second, while Margie Engle on Dicas was third.

“Billy was fast, but I didn’t think it was breakneck speed, so to speak," said Ward, who opted for only the first of two potential leave-out options. "I knew I had a couple of good riders behind me, but I thought, ‘Okay, don’t lose the class. I thought from doing the seven strides from 1 to  2, that might have been enough to catch Billy, and hopefully put enough pressure on Margie, and it worked out.”

Twomey returned second in the jump-off, laying down the gauntlet to finish in 38.29 seconds.

“I WANTED to try to put it up to the other riders," said Twomey. "My horse is naturally a fast horse. McLain’s horse obviously has a really big step, and he was able to leave out a stride in the first bending line, and he probably ended up a little faster than me there. I’m really happy with the way my horse performed; he always seemed in good shape.”
Photo by Kathy Russell Photography
Both the temperature and the time allowed played a role in Course Designer Alan Wade’s 1.65m, championship-style first-round track, with nine qualifying to return for the jump-off.

“I think the heat was getting to a lot of horses, and Dicas competed yesterday also. I was just really happy with the way he performed,” said Engle, noting that she’s only recently moved the 11-year-old Rheinlander gelding up to the five-star level.

This is the second five-star grand prix win in the space of a week for Noche de Ronda and Ward, who planned their season with the Nations Cup Week CSIO5*/CSI2* at Deeridge Farms in mind.

“We were going to do a smaller grand prix earlier in the season, and then do these two weeks in Wellington back-to-back, to kind of get her up and running and in gear, and get her fitness level up to speed,” Ward said, adding that he was particularly delighted with the mare’s performance in the second round.

“Deeridge Farms is obviously a very different venue,” he said. “We considered that when we thought about competing her two weeks in a row. I thought that the change in venue and the grass would just freshen the horse a little bit.”

With the Tokyo Olympic Games (JPN) less than six months away, Ward, a notoriously careful planner, is leaving no detail to chance, especially when it comes to Noche de Ronda.

“Last week, the jump-off took a little bit out of the horse." he said. "This is a horse that’s aimed at big things, and she’s going to have to hold up to multiple days. Once in a while, you have to do that program, and I’m thrilled by the way she responded."

“She’s the most marish mare I’ve had,” said Ward. “She looks like this big, quiet, almost equitation horse, but she’s not. She’s very correct in herway of going, and she’s quite careful and has a big heart. Put all those things together, and you have a horse."

“He felt great. He’s nice and fresh. He’s had three months off and I was hurt a bit earlier this circuit, so he’s feeling great. I had already given him a bit of a break before and he doesn’t usually love breaks, so he’s ready to go. He tries his heart out. He has a huge heart and always wants to please, so it’s a great combination to have,” commented Engle, as she discussed her round and partnership with the impressive gelding, who she has competed since 2017.

Engle went late in the order and was clean to qualify for the jump-off, along with Jessica Springsteen on Don Juan van de Donkhoeve.

Springsteen stopped the timers in 47.12 seconds to finish the class with a double clear effort and fifth place in the overall standings.

“To be honest, I thought it was a really challenging course," said Engle. "It was tough enough and delicate. There were a lot of verticals that were definitely maximum height. The horses really love this venue though, and they jump great on the grass. You’ve got a good group of horses here, many of the top horse and rider combinations in the world, so it was just a really nice class.”