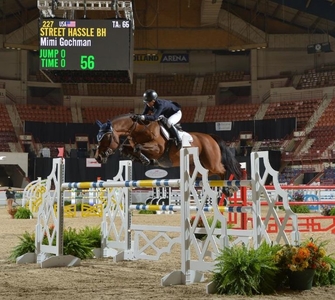 Mimi Gochman on Street Hassle (Photo by Al Cook)"We finally did it," said Caristo, who has led the Zone 2 teams with riders from from Pennsylvania, New York and New Jersey since the mid-90s and for most of its 13 wins.

Madison Rauschenback, of Newburg, N. Y., riding Gillette B,  who rode as an individual for Zone 2, had two four fault rounds.

Cunniffe, Mimi Gochman and Steckbeck were all clean in the first of the two round Nations Cup type class, so Sophie Gochman didn't have to go.

MIMI GOCHMAN and Cunniffe were clean again in the second round, and Steckbeck had just one rail so the Zone 2 team was assured of a victory, but the individual scores also counted towards qualifying for the Individual Championship Saturday evening, yet Sophie Gochman still didn't go. 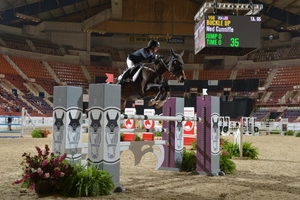 Ned Cunniffe on Buckle Up (Photo by Al Cook)"We has a two rail cushion going into the second round," said Caristo. "Sophie Gochman didn't go back either time because she won the Individual Championship last year and didn't want to go for it again. So maybe her sister Mimi will win it this year. She's leading now."

"I've had Stevie (Street Hassle BH) about three years now," said Gochman. "He is super reliable and has consistently done the high junior jumpers and Prix des States twice now with me. He's got a great personality and tries his best every single time."

Regarding the success of the team, only incurring 4 faults after two rounds, Gochman said there was a sense of security going into the second round.

"It feels very secure. I did my best, as a team we did our best, and it's nice to have it assured that we (as a team) were going to do well," said Cochman. "It was nice to go in and just focus on our rounds. I went in just trying to go clear. It was fun!"

Tied with 12 faults for thesilver and bronze medals, one rider from Zone 7, Savannah Hemby, and one from Zone 5, Paige Matthies, were chosen for the jump-off.

Zone 7 won the silver medal with a clear jump-off round ending on a team score of 12 faults and Zone 5 took the bronze after pulling a rail in the jump-off.

"I couldn't be happier with my team," said Caristo. They're all young, 14 to 16, and they're all go-getters. I''d be very happy if I could have them back another time."

"One time I had the same group for three years, but it's usually twice at the most," said Caristo. "All these kids are so talented with great horses and great trainers."