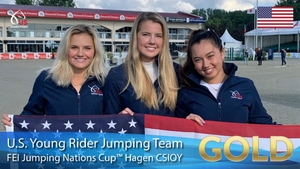 Germany finished second with four faults, followed by France with eight, to round out the top three nations.

The Future Champions Nations Cup was competed under what will be the official format of just three riders for the Tokyo 2020 Olympic Games in Jumping and Dressage.

“The three rider team was outstanding,” said Kursinski. “There is no substitute for this type of experience. They bonded and will never forget this, at this age, and at this level. It’s an invaluable experience. I’m so glad we brought a team.”

WITH THE FEI selecting Hagen to debut the new format, 19 nations made up of three combinations competed with no drop score, and the individual competition going first,

Kursinski was optimistic about the new format but noted the additional pressure it may add with no drop score option.

Actually, it is not an entirely neew format, as that was the format in Rome in 1960 and in Nations Cups previous to Rome.

“I liked how the top 10 teams (out of 19 competing in the Nations Cup) came in today with a clean slate, everyone starts the day fresh," said Kursinski. "I’m a bit old fashioned, and I like the drop score, not having a drop score will certainly add pressure at the Olympic level. It’s excellent that the FEI had this event to test out the new format and iron out the details.”

In the first team qualifier round, Rinaldi of St. Charles, Ill., on Cleo van de Helle had one rail for four faults, Cohen of New York, N.Y., on Billy Fanta had two rails, adding eight faults, while anchor McKean of The Woodlands, Tex., on Isabelle added one time fault for a team score of 13 faults for a sixth place finish.

The top 10 team finish qualified the U.S. to advance into the final and determined the start order.

In the final, all three U.S. riders jumped clean to secure the gold.

The U.S. Dressage Young Riders finished fourth in the team competition at  Hagen, also a test event for the new Olympic format. 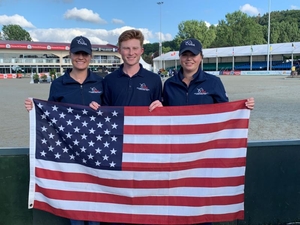 Dressage Young Rider teamThat was the final event on The Young Riders Dressage Tour, a part of the Emerging Athlete Program, which is an important part of the dressage pathway, introducing a group of young riders in the U.S. to international competition as individuals and as part of a team.

“The Tour athletes are competing against their peers in a truly international competition. There were eight other countries here this week,” said Williams. “It is good for them to see how they stand and it’s very positive as we saw today but we have ways to get better.”

Competition kicked off with the FEI Young Rider Team Test, which served as the Team and Individual qualifier.

Ebeling on Illuster van de Kampert, was first in the ring for the U.S. and produced a strong test, earning a 68.824.

Kadlubekon Perfect Step and Jones and Don Philippo followedt, scoring a 68.046 and 67.101, respectively.

The U.S. placd fourth in team competition on a score of 207.521, the highest placing for the U.S team since the program began competing at the Hagen CDIO-Y.

“All three of our athletes rode clean and correct tests, they were very steady, and each one contributed to the team’s placing,” said Williams. “With just a 0.7 point spread across our scores, we are seeing a consistency and solid performances that shows us that the development of the dressage program is good. I’m thrilled!”

“It was interesting to see the new Olympic format,” said Williams. “I think it was a good test event. There are a lot of differences and there are going to be interesting twists and even fun.”

Jones placed first in the Consolation Freestyle on a score of 72.275.

Ahead of the CDIO-Y Hagen, the Tour made its first stop at the Compiègne CDI-Y in May.

All three riders had successful results and, with Williams at the helm, all finished in the top five in the CDI-Y Individual Test.

“The Tour and the Discover Dressage Emerging Athlete Program are very valuable to the development pathway,” said Williams. “It is motivating and gives our young athletes a goal to aspire to. It’s quite an honor to be named to the Tour because you have a chance to represent your country on a team. And it exposes them to different cultures and that newness and the mileage in experience will hopefully benefit them as they move forward in their competitive careers.”