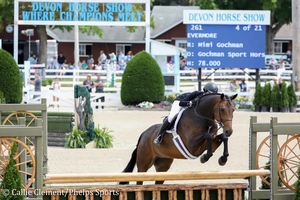 Training under Ken Berkley and Scott Stewart, Gochman prepared for the 2019 Devon Horse Show with no shortage of expert advice.

THE IMPRESSIVE Evermore was also awarded the Angelo Award, which is presented to the horse who best exemplifies the classic hunter horse in movement, jumping style and presence.

“Evermore is so sweet," said Gochman. "He always has a good attitude. He tries his best no matter what. It’s such an honor to be competing against so many amazing riders. It’s so competitive here that you really never know until the very end. I’m so honored to be here at Devon. It’s such an iconic horse show. All of the other junior riders are so amazing here.”

“I ride with Ken Berkley and Scott Stewart," she said. "They do everything for me. Scott is such an amazing hunter rider and knows all of the ropes. Ken has been doing this forever and just taught me how to do everything. They just told me to have smooth rounds today. They told me to just go slow and meet all of the jumps as they come and keep a good connection. I always try to do exactly what they say.”

Gochman and Evermore have been paired together throughout the duration of the 2019 Winter Equestrian Festival, regularly placing in the top of the standings in the Small Junior Hunter division.

Augusta Iwasaki was named Best Child Rider on a Horse, based on her impressive performances in the junior hunter divisions, and Gochman was third.