LEXINGTON, Ky.--Finishing on his dressage score of 27.9, Boyd Martin of Cochranville, Pa., rode Tsetserleg to place second by a mere 2.6 points to Oliver Townend of Great Britain on Cooley Master Class, who repeated his 2018 championship. 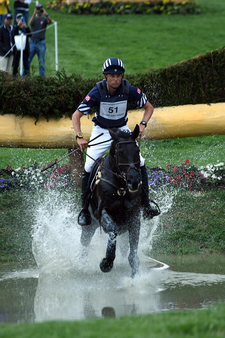 Boyd Martin on Tserserleg (Photo by Sarah Miller MacMillan/MacMillan Photography)Townend is only the fourth to successfully defend his title, along with Michael Jung, Kim Severson and Bruce Davidson.

Five Europeans competed in Kentucky on April 25-28, and they placed first, third, fourth, sixth and 10th.

Tim Price of New Zealand on Xavier Faer was third on his dressage score of 30.9, Piggy French of Great Britain on Quarrycrest Echo was fourth on 33.5, Felix Vogg of Switzerland on Colero was sixth and Leslie Law on Great Britain on Voltaire de Tre' was 10th.

WILL COLEMAN on Tight Lines was also clean jumping and within the time on cross country but picked up 15 faults for knocking down a flag in the water at 11A to finish 13th. 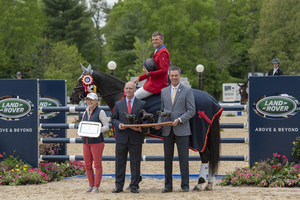 After that, everyone went the long way except Sara Gumbiner of Somerset, N.J., on Polaris, Dutton and Martin.

Dutton was 45th to go cross country, and Martin was 51st.

"I'm stabled next to Phillip, and we were kind of egging each other on to see who would do the fast way at the Normandy bank, but I was not sure he was going to do it," Martin said. "And then while I was warming up I heard that he did it. I thought 'oh, I have to do it now or I will look like a big wimp.' I realize that could have seriously backfired." 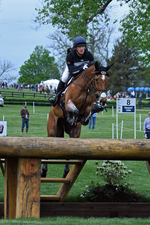 "He's come out a lot keener this time than last time and he felt quite strong for him in places," said Townend, the world's number one ranked rider. "But he was definitely up for it. When he made up his mind on something, he felt more in control than I was. He knew his job today and this seems to be a place that he loves.

"He was definitely up for it today, more so than I've ever felt him," he said. "It didn't matter the distance, his ears were pricked and his legs were out of the way. I hope he's coming into his own; it's his second five star and he felt like he knew more about his job this year than last year."

Townend added 1.2 time penalties to his dressage score, an issue he felt was caused by his horse losing a shoe halfway around the course.

"I was very conscious of not having the shoe on and he had a bit of a slip turning back into the main lake," he said. "I felt like I was balancing more than I normally would, I was not trying to pick up big distances, just trying to keep him in balance all the while being a touch more conservative than normally. You have beautiful ground here but the grass is just a little slippery."

Martin, 39, was pleased with the 12-year-old Trakehner's performance. 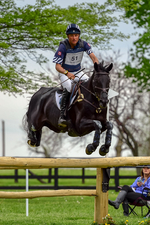 Boyd Martin on Tsetserleg (Photo by Allen MacMillan/MacMillan Photography)"He gave me a fantastic ride actually," he said. "My little guy felt a lot more seasoned and I have a better partnership with him. For a half-bred horse he's got quite a good gallop and speed. He was just a gutsy little trier."

On Sunday, the top three all jumped clear rounds to maintain their positions, but Dutton, who was fourth after cross country, had eight faults to drop to seventh.

“I was thrilled with my bloke today," said Martin. "Tsetserleg doesn’t give you the most confidence in the warm-up. He was jumping all over the place and twisting, and I heard these two, Ollie and Tim, giggling at me in the warm-up. But he's a great little horse. He gets in the ring and a bit like Tim's horse, just spooks that little bit; I do have to say, I think he loves a bit of atmosphere and the crowd. He tapped the first fence a bit and I thought, ‘Aw crap, this is going to be a long round,’ but at the second fence he really tried, and then I thought, ‘Oh, I’ve got a shot here.’’

“He’s been a bit difficult in the combinations," said Martin. "He usually jumps really, really big over the first part and gets too close to the second part, so I felt like I had to really come in slow and short to the fence 4ab. Once he cleared that, I knew I was in for a chance at a clear round. But all in all, I couldn’t be happier or more satisfied. This year he has come out blazing. He exceeded my expectations and I think he is only going to grow and get better from this event.” 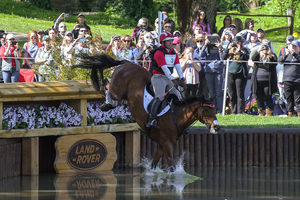 Buck Davidson on Park Trader (Photo by Sarah Miller MacMillan/MacMillan Photography)"I saw Boyd's horse in the warm-up," said Townend. "I heard the crowd (so knew he'd gone clean) and thought `Oh boy, you must have done some job.'"

"I've had this horse from the get-go." said Townend. "This was a huge team effort. I've always believed in him, and we finally got him in top form. It was just my job to press the buttons at the right time. I'm so proud of him."

"This was definitely the most pressurized round for me," said Townend. I'm just glad I didn't mess him up. I hope he makes it back here again next year. He's going to be the pet of our yard for the rest of his life."

"I was kind of surprised we were clean," said Price of Xavier Faer. "He's spooky, but he's easy to work with because I know it's there. But he hates Liverpools, and the whole center of the arena was a lake."

Davidson of Unionville, Pa., was awarded the Sportsmanship Award, an award that is voted upon by all of the competitors at the event, so it is extra special as it is voted on by the riders' peers. 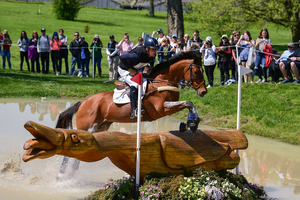 Chris Talley on Unmarked Bills (Photo by Allen MacMillan/MacMillan Photography)Chris Talley, 24 of Jeffersonton, Va., who grew up in Honeybrook, Pa., won the Youngest Rider who completed the event Award.

Talley finished 27th of the 31 who finished, but the most impressive part of his finish is that he rode Unmarked Bills, an off the track thoroughbred who raced as recently as November, 2014 and won a race on Oct. 21, 2014.

In just four years, Unmarked Bills moved from the racetrack to finishing in a five star Event.

"He came off the track, and in just four months did his first training event," said Talley. "He's a super horse cross country. He's so honest." 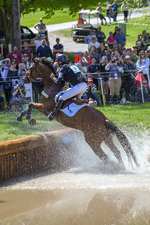 Chris Tally on Unmarked Bills(Photo by Sarah Miller MacMillan/MacMillan Photography)"In just 18 months, he was doing two star events," said Talley. "Going into Kentucky, we wanted to make sure he had plenty of confidence, so we did advanced events for two years."

"We have a great partnership," said Talley. "He trusts me completely and I trust him."

"We haven't made an y plans yet for what Bills will do next," said Talley. "He's going to get a nice long vacation, maybe a couple of month's rest. Then we'll see, maybe another five star."

Talley won the Arena Eventing competition at the Devon Horse Show last year on Sandros Star, and he said that he was going to defend his title on Sandros Star this year.

Arena Eventing at Devon is featured on Sunday evening, May 26.