DEVON, Pa.--A vision of spirited beauty and power, the American Saddlebred excels in the show ring, demonstrating two unique gaits to the breed: the Slow Gait and the accelerated Rack. 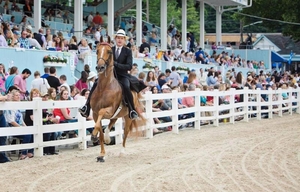 Carson Kressley competing in front of a packed crowd.   9Photo by Brenda Carpenter Photography)Tracing the breed's ancestry to the early 1700s, the classic American Saddlebred will once again be showcased in a variety of divisions because of their incredible versatility at the historic Devon Horse Show and Country Fair, scheduled this year for May 23-June 2.

Saddlebred and Hackney competition will take place from Wednesday, May 29 through Saturday, May 1.

Spectators can expect to see all of the five primary disciplines represented at the Devon Horse Show: Three-Gaited, Five-Gaited, Fine Harness, Park and Pleasure.

Characterized by a trimmed mane to emphasize their long and elegant neck, three-gaited horses show in trot, canter, and animated walk.

CELEBRITY Saddlebred exhibitor and judge of the Ladies' Hat Contest at Devon, Carson Kressley picked up his first tricolor ribbon aboard Famous Kiss in the Open Three-Gaited Park Horse Stake in 2016.

"I've shown in a lot of places, but there's nothing as special as the crowd support at Devon," said Kressley. "Showing in front of thousands of people in the Dixon Oval is a thrill like no other. I've shown this horse a couple times this season and we've been second every time. So, to pull it together and win a big class like this here is a huge thrill. Devon is one of the greatest shows in the country. It's where you come, watch and dream of competing."

Another crowd favorite in the Five-Gaited Section is the $3,000 Five-Gaited Saddlebred Stake, which will also take place Friday, May 31st under the lights of the Dixon Oval.

Five-gaited horses have been taught two specific four beat gaits that are either performed slowly or with rapid, high steps.

Refined yet powerful, the Saddlebreds will be seen parading through the ring with their natural tail and mane flowing and riders dressed in traditional saddle seat habit.

The always popular pleasure classes will also return for exhibitors to view in addition to many hunter divisions and open English pleasure division.

The pleasure divisions are always a favorite for exhibitors and spectators alike as riders showcase their mounts in the Dixon Oval.

These events will take center stage Wednesday, May 30th through Sunday, June 2nd.

The ASB Hunter Country Pleasure division is rising in popularity and is a part of the World Championship horse show for the first time.

Two years ago, the late Janet Sterba earned a championship title in her division once again, sweeping the Five Gaited Pleasure Championship piloting Born For This.

"This is our second year working together," Sterba said about her at the time 12-year-old mare, CH Callaway's Born For This. "She's had a grand career. I'm just thrilled to have a good ride, especially on this mare. I'm blessed to get to show her."

Fine harness, a discipline where horses are shown at the trot and animated walk in a four-wheeled cart, will culminate in the $1,500 Fine Harness Horse Championship at the Devon Horse Show.

Drivers are permitted to wear long dress and suits, accenting the elegance of the drive.

Distinctive traits including mental acuteness and willingness to learn have positioned the Saddlebred as a diverse equine athlete.

Revered as the "Horse America Made," Devon Horse Show is proud to feature the talents of this historical breed.

The Devon Horse Show and Country Fair is the longest running and largest outdoor multi-breed competition in the United States.

With the grandeur of Philadelphia's prestigious Main Line setting the stage, the event features a world-class field that annually ranks among the most prominent internationally.