Boyd Martin on Tsetseleg won the CCI 4* at Tryon

TRYON, N.C.--Boyd Martin of Cochranville, Pa., rode Tsetserleg to a clear cross-country round to win the CCI 4*-S competition at The Fork at Tryon International Equestrian Center on April 7. 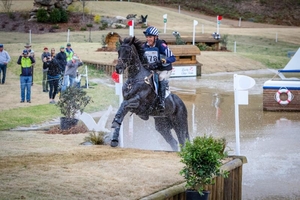 Boyd Martin on Tsetserleg (Photo by Shannon Brinkman)Martin stopped the timers in 6:47 to finish on a total score of 35.00, improving from third throughout the week.

Felix Vogg of Switzerland on Colero placed second after his clear cross-country round in 6:54 to finish o a score of 39.80, while Elisabeth Halliday-Sharp, now primarily based in East Sussex, England, on Fernhill By Night placed third on a score of 40.00 as well as fourth on Deniro Z, with a final score of 41.70.

Twenty-six pairs competed over the track set by Captain Mark Phillip, which mimicked the same course used for the World Equestrian Games in Tryon in 2018.

Martin was happy for some redemption over a particular sailboat obstacle that he admitted was less distracting than in September:

"At WEG I got the wrong ride in, plus there was a lot of other stuff around it to distract the horse and that wasn't there today, so it was a little bit easier to get him over it today," he said.

"BUT STILL, it was a good feeling getting over it, and I got a big, big cheer from the crowd," said Martin. "I could distinctively hear the owner shrieking, Christine Turner, who has been a great supporter and I could hear her cheering on her horse. It was good to get that behind me and come here, and to be honest the horse, Thomas, is a little bit more seasoned now and a little further on. He's probably learned a little bit more in the last 12 months, so he feels a lot more seasoned now, so he's a lot easier to ride.

"He's not so distracted ,and I've learned how to ride him a bit differently and a bit better, too," Martin said. "It was good to have a win because I had a bit of an awkward start to the year - just sort of bouncing around, a bit injured here and there, and missing a few shows, and it was good to win one, but it's also good to always remember that some of the best horses here chose to run a bit slow to prepare for Kentucky, so we still got a little bit of work ahead of us. But he was good and strong in all three phases."

Martin said that he did plan to go a bit quick due to missing some prior events in the year, but didn't go "flat out."

"I thought he needed a good run and a bit of a fitness run, but not to go so fast that you risk an injury or anything like that," said Martin. "He felt very, very strong around the whole track and was quite fit. He jumped really well and I think we're in good shape."

"I like it down there. It's a really, really good track," he said. "It's not as easy to ride as you think just because it's an old golf course, so there's all these little humps and lumps and the ground is not quite flat. So sometimes it's a bit deceiving, especially on the galloping jumps, you think you see a good line and then it changes just a little bit just because the undulation of the ground.

"It was good coming here just with a handful of horses and here for a few days just to concentrate and zero in on them," said Martin. "I think it's a great show and a great preparation for Kentucky and a really good show for the young horses to get them ready. Obviously, I love this place. On top of that, I think Mark is such a great course designer, and he really knows how to build a good track. I think he's building better tracks now than ever."

Having cruised through a competitive track at TIEC, Vogg is feeling well-prepared for his trip to Kentucky.

"There's always something to fix and some little stuff to do that I'll try to get done in the next two weeks," said Vogg. It's never perfect, but I'm pretty sure he's more ready for Kentucky this year than last year."

Halliday-Sharp also used this as a Kentucky schooling round.

"Blackie [Fernhill By Night] was really, really good," she said. "He got a little bit sort of tired towards the end, but it would be quite an intense course for him. He hasn't probably done a course that intense for a while, but I was really pleased. He got a little bit bogged down near where the squirrels were, but he fought for me there, and then he was just feeling like I was running out of push as I got near the end, so I chose the easier route through the water because I thought that was the right decision. He really tried and he's not a racing snake, so he did the best he could, so I'm pleased with where we ended up."

IN THE CCI 3*-S competition, Doug Payne on Starr Witness placed first on a total score of 33.20, while second went to Will Faudree on Caeleste on a score of 38.00, and third was awarded to Katie Lichten on RF Luminati with 41.10.

In the CCI 2*-S Division, Ryan Wood on Ruby placed first with a score of 37.00, followed by Will Faudree on Mama's Magic Way in second with 37.70, and Wood also placed third on Chusinmyconfession with a score of 39.00.

Clark Montgomery on Caribbean Soul flew to a win in the Advanced Division after their fast and clear cross-country performance in 6:39 to finish on a score of 38.20, while Martin on Long Island T was second on a score of 45.70 and Vogg on Archie Rocks was third on a score of 48.70.

"She [Caribbean Soul] was really good all weekend," said Mongomery. "To be fair to her, I was packing to go home to Kentucky like crazy just a couple days before we got here, and didn't get to do my normal preparation for the dressage, so that was probably my fault. She wasn't misbehaved at all, she just didn't have a very clean test, with a couple little mistakes, so we didn't score as low as we've been scoring, but I was still really happy with her."

"For the jumping she was great, she was really, really good," said Montgomery. "And then in Cross-Country she was absolutely phenomenal. I couldn't ask for her to be better. I mean, her gallop is just the coolest thing I've ever felt, for sure. It's just so easy,. And honestly, I wasn't going to go quick on her today and she just loves it. It's just the speed she operates out of, so I just let her kind of cruise around and she came in that fast. It was wonderful."

"I thought the course was super," Montgomery said of the White Oak Course. "I thought it was definitely tough enough and big enough and I thought it was the biggest track she had jumped to date, so I was excited to see how she handled it, and I like Mark's courses a lot. They remind me a lot of the tracks you jump in England, with the bolder, forward distances and bigger fences. The setting down there on the old golf course is just absolutely beautiful around the lake, so I thought it was great!"

Martin was pleased with the cross-country ride put in by Long Island T, but said that "he's definitely a little bit too keen and is a strong, feisty wild man on course. He still jumped really well, and gave me a good ride. I think he'll be better suited for Kentucky because it's a longer and more flowing course, where you can get him to fall asleep a little bit more between fences.

"He's very strong in the dressage and jumping, and he's very game on Cross-Country, but he just gets really strong and a little bit out of control. He's a hard horse to ride fast," Martin said. "You get baited into wrestling with him and have to steady him up. It could go either way come Kentucky, but you got to be in it to win it."