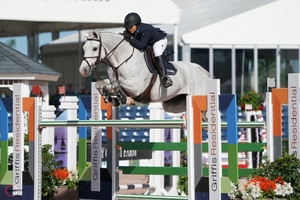 Samantha Cohen on Carmen (Photo by Sportfot)From 45 first round competitors in the $50,000 Grand Prix CSI 2*, 10 went clean to qualify for the jump-off, and of them, six were clear again.

The fastest of those was 18-year-old Samantha Cohen riding Carmen, who stopped the timers in 37.56 seconds to win, even though she was first to go in the jump-off.

“I was first to go and nine were after me, with so many fast riders. I just wanted to go in and give it my best shot,” said Cohen. “She’s really quick around the turns, and she’s deceptively fast. She doesn’t ever look like she’s really running. I was really happy when I came out, but I was not sure it would hold.”

THE SPOT in the jump-off track that Cohen thought most about was the double combination and making sure Carmen was prepared for the vertical to oxer combination.

“I wanted to gallop away from the previous fence and then take my time really getting her on her hind end for that,” she said. “I didn’t want her to dive into ‘a’. That was, for me, the trickiest part. She is just a genius on the turns. She’s right there with me, and I knew that’s where I could get my time.”

Cohen spends the summers competing in two-star and three-star competitions with her trainers, Laura Kraut and Nick Skelton.

“This is my first grand prix win, so I’m really excited,” she said. “I’ve jumped a lot of big tracks with her, so I was really confident going in and knew I could do it.”

Carly Anthony riding Clochardwas clear in 38.73 seconds for second placen and third was Rodrigo Pessoa of Brazil on Farrero, clean in 38.92 seconds.

WARD ON HH Gigi’s Girl won the $72,000 1.50m Classic that had 42 entries competing over a course set by Alan Wade of Ireland, 16 of which were clear to make the jump-off. 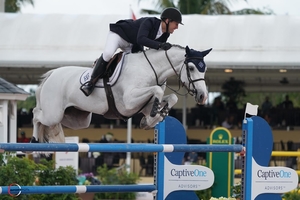 McLain Ward on HHGigi's Girl (Photo by Sportfot)Riding out of the second position in the jump-off order, Olympic team gold medalist Ward and HH Gigi’s Girl put in a blazing fast time of 33.36 seconds that couldn’t be caught.

There were seven double clear rounds in the class.

Coming second was William Whitaker of Great Britain onnn RMF Echo, clear in 34.51 seconds., and third place went to Erynn Ballard on Ilan Ferder’s Ceitasi, who had a time of 34.89 seconds.

“The jump-off was actually set up pretty nice for her; it was a good track for her strength,” said Ward of Gigi. “She was great. She jumped a nice first round. On Thursday, it was not the round we wanted in the WEF Challenge Cup, but she came back really strongly today. In a jump-off like that with a large number and very fast ones and very good prize money, everyone is trying hard. It doesn’t matter if you go first or last, you have to try and do the best round you can.”

“This is her fourth week of competition this circuit, and we’ve had the program we planned,” he said. “She’s actually been very consistent and a little bit unlucky. It was great to have it all come together nicely today. She’s a very good jumper, a very careful horse. We’ve been lucky to have some great results and nice wins on her. She’s been a very good grand prix horse.”

Along with her 1.50m win, HH Gigi’s Girl was named the Style Award winner.