WELLINGTON, Fla.--In a stunning upset, the power house team of Lucy Deslaurier, Laura Kraut, Beezie Madden and McLain Ward, each on his or her top horse, finished third behind Mexico and Israel at the Palm Beach Masters on Feb. 17 in the first of three North American Nations Cup classes that will qualify two teams for the Final in Barcelona next fall. 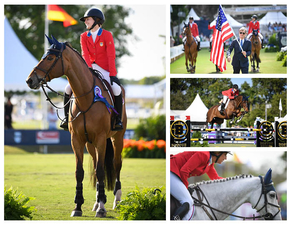 U.S. team members, clockwise from left, Beezie Madden, Ridland leads the team, Lucy Deslauries, Laura Kraut"On paper, there was no comparison between the U.S. team and the others prior to the class," said Chef d'Equipe Robert Ridland. "We had four Olympians on our team, with the lead-off and anchor riders on our team being the two most recent World Cup Champion riders on their World Cup winning horse."

Madden on Breitling LS led the way in the first round with a clear round, but then Deslauriers on Hester had two rails for eight faults and Kraut on Confu added four faults as did Ward on HH Azur.

Mexico led after round one with no faults, the U.S. and Ireland were tied with eight faults, Israel had nine, Canada 12 and Colombia 16.

IN ROUND two, Madden had four faults, Deslaurier and Kraut were both clear but Ward had a rail to add a four fault total to their first round score to finish on 12 faults, while the young Mexican team added just four faults to finish on four for the win and Israel had three clean rounds to finish second on nine faults.

Ireland was fourth with 14 faults, Canada fifth with 20 and Columbia sixth on 28.

"I can't feel bad about Mexico beating us," said Ridland of the team that also won in Dublin last year. "In Dublin, they went wild when they won. Here, there's a lake between the warm-up area and the ring, and they all jumped in the lake with their riding clothes on. I wouldn't have believed it if I hadn't seen a video of it. I had already left for a plane back to California."

"We didn't have a bad day," said Ridland. "Both Beezie and Laura each had a clear round. As for Azur, and McLain would probably agree, she had been off for a while and was just a little rusty."

Azur pulled a muscle in her side last year and was sidelined for the rest of the year.

Devin Ryan had been originally named to the team, but had to pull out a few weeks ago and was replaced by Margie Engle on Royce, but Engle was so ill that she told Ridland she just couldn't ride, so Deslaurirs was pulled in at literally the last minute.

Final entries for a Nations Cup must be made one hour before the class, and Deslauriers was named one hour and five minutes before the first horse went in the ring.

"Lucy wallked the course with us, but that didn't give her much time to get ready," said Ridland. "Her second round was beautiful."

"Royce has been jumping extremely well, so losing him at the last minute was unfortunate," said Ridland. "We had our A team, and they did a good job, but it just wasn't our day."

WITH JUST two qualifying Nations Cups left for North America, one in Mexico and one in Canada, Mexico leads with 100 points, the U.S. is second with 80 and Canada third with 60.

"Getting the second spot to make it to Barcelona will probably come down to Canada and us. It's always hard for us to get a team for Mexico. Our league, although it's small, has gotten very strong."

This Nations Cup was held at the Palm Beach Masters, hosted by Lou Jacobs and the Jacobs family on their Deeridge Farm adjacent to the Polo Club.

"The event was great," said Ridland. "It was great jumping on grass again. The trend is going back to grass for Nations Cups. Grass is better for the horses. Hats off to the organizers at Deeridge."

“Coming up from our team’s win in Dublin, we knew that we had a good team—a great team—great riders and great horses,” said Garza Perez, the most experienced of the four. “These three riders are amazing. They ride much more than their age, and we really pulled together and pulled out the win.”

For Israel, two-time Olympic veteran Daniel Bluman was double clear on Ladriano Z, Ilan Ferder and J'adore Van Het Klinkhof had five and eight, Ashlee Bond on Chela LS  had four and clear, and Danielle Goldstein had eight and clear on Lizziemary to finish on nine faults.

Master horseman George Morris would not have approved.

When, during his stint at U.S. chef d'equipe, he first saw Bond riding, and felt she would be good material to make the team, the first thing he asked her was, "Can you put yur hair up under your helmet?"