Interesting, heartfelt stories and pix's for local Equestrians (like YOU) that are personal and noteworthy.
Send in your 200-250 word story and 3 pix's to:
advertising@thehorseofdelawarevalley.com

Amy Meravi proves it doesn’t matter how you started

SPRING CITY, Pa.--Amy Meravi and her sister, ranging in age from 5 to 13, started life horse crazy and, not wealthy, worked at anything to ride, building a life that 30-plus years later includes weekends and ribbons riding on the A circuit. 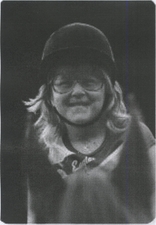 "We were not wealthy - we had jobs to pay for our lessons and worked off the board," said Meravi.

"Nothing was fancy, everything was either homemade or well-used.

"Our first horse was free, and had emphysema.

"Thirty-some years later, we step back and laugh, “Do Mom and Dad even realize what we’ve accomplished?”

"We rode whatever we could.

"We did whatever job needed to be done.

"Cleaning churches, houses, stalls, picking hay out of the field in July…nothing was beneath us.

"Everything was a means to be able to ride. 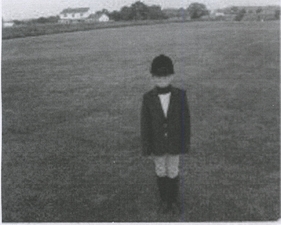 Amy Meravis in her first show outfit, rubber boots and a corduroy jacket from J.C. Penny"What youngster doesn’t want to be a pro?

"But all the time we spent making money to be able to ride and show horses made us realize that we would have more time to enjoy our own horses if we had other careers. (Plus, we’re really bad at selling our horses!)

"My advice to those who feel like they’ll never be able to compete at the “top” is to focus on yourself and what you have.

"Define your own success - no one can take that from you.

"Opportunities will find you.

"Your mindset and work ethic are more important than the brand of your tack or apparel, or than the perceived quality of your horse.

"The goals are yours: start small, build confidence, and see how far you can go!," concluded Amy. 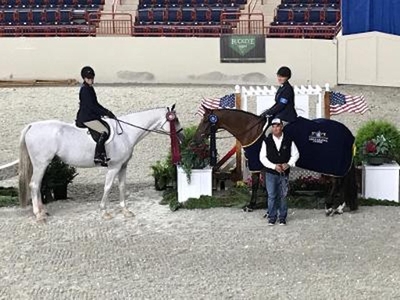 Amy Meravi and Barbara Brungess, first and second in an Adult Hunter class at the at the Harrisburg Summer National Horse ShowThirty plus years later, Amy and her siister Barbara Brungess, 8 years older than Amy, have carved out good careers for themselves.

Amy works at Vanguard, and both girls live with their parents. Bernadette and Earl Brungess. on a family farm they inherited in Spring City, Pa., where they keep four retired horses and two miniature donkey.

The girls keep horses with their trainer, Troy Hendricks, in Glenmoore, Pa.

Both girls show on the A circuit in Adult Hunters, with Amy riding Zertago, a Dutch-bred gelding.

"We are fortunate to have ribbons from Devon, Washington International, Capital Challenge, Zone Finals, WEF, and National Derbies up on our walls, and Mom and Dad just want to know if we’re going to another horse show this weekend," said Amy.

"Part of the irony is that although we live together on a farm, my parents level of involvement in the horses is watching us ride when one of us isn't home, or feeding them while we are at shows." said Amy. "Once we were old enough to take ourselves to shows they'd prefer to watch the video!""