Jack Fisher saddled Noble Stables' Dynaformersreque to win the $30,000 Sport of Kings Maiden hurdle at the Steeplechase of Charleston on Nov. 11, and that gave him the Trainers, Races Won title for 2018 by one race over Ricky Hendriks. 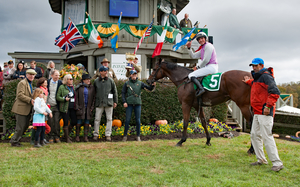 Gold Cup winners circle, Doc Cebu with Jack Fisher, far rightWith a one race lead going into the Steeplechase of Charleston, Fisher's win gave him the title even though Hendriks also won a race in Charleston, saddling Rosbrian Farm's Caldbeck to win the $25,000 Three Year Old Hurdle and thus taking the three year old title for 2018.

And Fisher has yet another title, that of trainer of the Timber Horse of the Year.

Fisher has dominated the trainer standings for a number of years, winning titles for the past six years, but he was seriously challenged this year by Hendriks, as the two traded the lead in both categories almost meet by meet.

FISHER historically has trained his horses to peak in the larger races at the end of the year.

"I'm not going to change anything next year," said Fisher, who added that he might add another horse to his already powerful stable.

"I have something to look at," said Fisher. "We're a little more relaxed now. I didn't go to see this horse this week because of the weather. I'll go in the next couple of weeks."

Despite losing both the trainer titles, Hendriks still might win a major honor, that of trainer of the Eclipse Award winner.

He has the three leading contenders in his barn, Zanjabeel, Optimus Prime and Jury Duty (Ire), but he wasn't the trainer of Jury Duty when that horse won the G1 $150,000 Grand National Hurdle Stakes at Far Hills.

Gordon Elliot brought Jury Duty (Ire) over to this country and saddled him for that race, and then the horse was left with Hendriks to train.

Those who vote on the Eclipse Awards often favor the horse that's won not only the latest but also the most financially rewarding race, the Grand National, but Jury Duty only raced once in this country, while Zanjabeel and Optimus Prime each won multiple races, including G1 races in this country.

Zanjabeel won two G1 races and finished second in another G1 stakes and second in a G2 stakes.

He finished second to Balance the Budget in the Colonial Cup Stakes on March 31 and second to Lyonell in the G2 Temple Gwathmey on April 21 before winning the G1 $200,000 Calvin Houghland Iroquois Stakes on May 12 and the G1 $175,000 Lonesome Glory Handicap on Sept. 20.

Optimus Prime  won the G1 $175,000 New York Turf Writers Cup Handicap on Aug. 23 in his first race in this country, then finished third behind Zanjabeel in the Lonesome Glory before winning the G2 David l (Zeke) Ferguson Memorial Hurdle Handicap on Oct. 27.

Those two horses' wins helped propel Hendiks' stable jockey Ross Geraghty to the top in Rider, Money won with $716,100 and their owner, Rosbrian Farm, to the top in Owner, Money Won with $712.050.

IN OTHER races in Charleston ,Invocation, owned by Straylight Racing LLC, trained by William Santoro and ridden by Sean McDermott, won the $30,000 Ratings Handicap Hurdle by 2 lengths over Go Get the Basil, owned by Eve Ledyard, trained by Hendriks and ridden by Bernie Dalton.