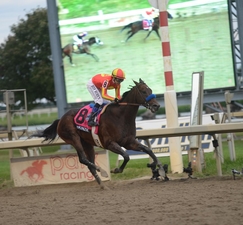 Mckinzie at the finish line of the Pa. Derby (Photo bt Alix Coleman)The bay son of Street Sense began the year as the favorite for this year's Kentucky Derby for Hall of Fame trainer Bob Baffert before a hind leg injury forced him to be withdrawn from a start in the Santa Anita Derby on April 7.

The injury was significant enough to take McKinzie off the Derby Trail before stablemate Justify was piloted by Smith as they swept through six races to become the 13th Triple Crown winner.

"If anything can be taken away from a sting of a Triple Crown horse retiring, it's a horse like this," Smith said. "He is an incredible horse. Really, really proud of him. Bob had him ready. To come off the bench at a mile and an eighth, Bob is just a tremendous trainer. I felt very confident that I could be aggressive early and move a little early."

Longshot Trigger Warning was sent to the front in the field of eight as Bravazo and McKinzie kept close in range with Mr. Freeze to their outside.

Through the first quarter of a mile in 23.81, the quartet led the way until Core Beliefs began to advance.

AS THE HALF-MILE was run in 48.91, McKinzie sat just a length off the still leading Trigger Warning, but as they advanced to the three-quarters mark run in 1:13.44, McKinzie was a head in front, and extended his lead to a length with a mile run in 1:39.40 while Axelrod closed from the back of the pack to serve as the runner-up 7 1/2 lengths over Trigger Warning who outlasted the rest at 81 to 1 while Hofburg finished a length behind in fourth. 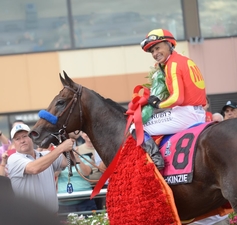 McKinzie with Mike Smith jockey (Photo by Alix Coleman)"He had been training really well," Baffert said. "I always felt like he was the best 3-year-old, and then he got hurt and Justify picked it up. He has come back with the time off and has responded really well. It was good to see him get back in the game. It was a pretty tall order to go 1 1/8 miles off that kind of layoff. But you can do it with good horses. I thought we had him pretty tight. I felt like he was the best horse. If you had asked me on Jan. 1, I would have told you we were going to win the Kentucky Derby with that horse."

McKinzie's victory was the second straight Pennsylvania Derby victory for both Baffert and Smith who came east to win last year's running with West Coast.

The Pennsylvania Derby was the second G1 victory by McKinzie since he was placed first via disqualification after being bumped by Solomini in the Los Alamitos Futurity on Dec. 9 in just his second career start.

The $170,000 purchase at Keeneland's September Sale began his career with a 5 1/2 length victory in his debut at Santa Anita, and added the G3 Sham Stakes to his resume before being disqualified to second for interfering with Bolt d' Oro in the G2 San Felipe on March 10 at Santa Anita.

Although McKinzie's afternoon efforts made his victories look easy, Smith had to remain strong with the young colt to ensure he didn't return to bad habits as each race remains a learning process due to time away from competition.

"He is still learning as well," said Smith. "Although he has raced, he had a lot of time off. He got to looking around, looking at the tracks and gawking around, and I had a really good hold of him today, and I didn't really want to bother anyone. The last time I rode him we got disqualified of course. I picked his head up, and when I asked him to finish he really got underneath me and really galloped out really well."

Rounding out the field in the Pennsylvania Derby was Core Beliefs, King King Zachary, Bravazo, Mr. Freeze and Instilled Regard.

Sent off as the 2 to 1 Pennsylvania Derby favorite, McKinzie paid $6.00 to win.

FOR A FEW minutes Saturday, Monomoy Girl was still unbeaten this year, still the best 3-year-old filly on the planet. 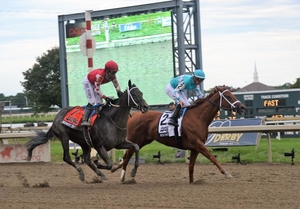 Monomoy Girl chestnut was disqualified for interfearance and Midnight Bisou was declared the winner (Photo by Alix Coleman)And then she wasn’t.

The 50th running of the $1 million Cotillion at Parx, also on Sept. 22, ended with a wild finish as victory was snatched away from Monomoy Girl and awarded instead to second place finisher Midnight Bisou, who had been beaten by a neck in the 1 1/16 mile race.

Monomoy Girl under jockey Florent Geroux seemed to be on her way to her sixth victory of the year without a loss and fifth consecutive GI win.

She had barreled into the Parx stretch with a 1 ½-length advantage over Midnight Bisou, who had lost her two prior starts this year against Monomoy Girl.

Smith and Midnight Bisou, down on the inside, suddenly moved to the outside, and she and Monomoy Girl battled to the wire. 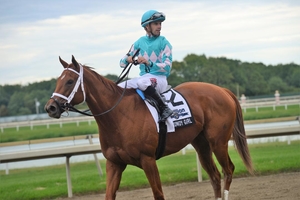 Smith maintained that Monomoy Girl moved to the inside and impeded Midnight Bisou’s momentum.

When Smith then tried to move Midnight Bisou to the outside, Monomoy Girl carried her even further outside.

“I was going straight as an arrow to stay in my path,” Smith said. “But when Momomoy Gir) chose to come over and take it from me, I choose the outer route. There probably would not have been a DQ if Geroux would have stayed straight at that point, but he came out again, and we wound up in the eight or nine path. I never got a straight run, and we got beat only a neck. You got to do what you got to do.” 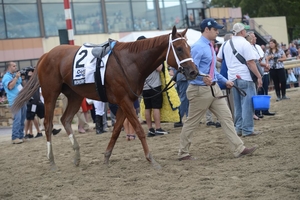 Monomoy Girl being walked around in front of the winners circle (Photo by Alix Coleman)Geroux, obviously disappointed, was walking back to the jockey’s room after the disqualification became official.

“It was close,” he said. "Monomoy Girl wandered around when she made the lead.”

When asked if he thought it was the right call, he shrugged.

“I am not the steward,” he said. “This was a million dollar race. A Grade I race. I thought our filly was the best today.”

Midnight Bisou is now four-for-four in her career at the Cotillion distance.

The daughter of Midnight Lute, who is owned by Bloom Racing Stable, Madaket Stables LLC and Allen Racing LLC, has five wins in eight starts this year.

In her last two starts, she was third in the Alabama and second in the Coaching Club American Oaks, both GI races at Saratoga this summer. 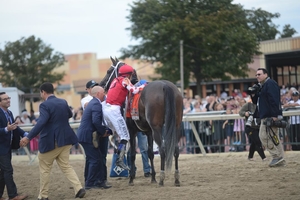 After about 20 minutes, Midnight Bisou was declared the winner by Stewards. Mike Smith getting back a leg up to go into winners circle. (Photo by Alix Coleman)After finishing third in the Alabama, trainer Steve Asmussen kept Midnight Bisou at Saratoga to train.

“We thought she came in here really fresh and on her game,” said Scott Blasi, Asmussen’s assistant. “It’s tough to win like this, lose like that. We’ve all been there. That being said, she deserved to win the race.”

Midnight Bisou went off as the 4-1 second choice in the field of eight.

Midnight Bisou, whose next start figures to be the $2 million Breeder’ Cup Distaff, will likely see Monomoy Girl again.

She rebounded from a last place finish against colts in the Travers Stakes at Saratoga in her last start.

The final order of finish after that was Separationofpowers, Chocolate Martini, Dixie Serenade, Jump River and Norma’s Choice.