GRANTVILLE, Pa.--Bernie Houghton had five winners in the past two weeks, all at Penn National, three of which were foaled at his mother Betsy's Sylmar Farm in Christiana, Pa. 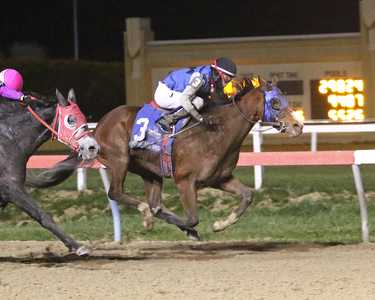 "Those two are owned by Kim Eshelman, who has worked for us for years," said Houghton. "They race in her husband's name."

"Kim bought her as a yearling at Timonium," said Houghton. "She won an allowance first and then this Pa-bred allowance."

Swan Point was bought for $15,000 as a yearling and has since raced 18 times, winning three times with five seconds and five thirds and earning of $121,057. 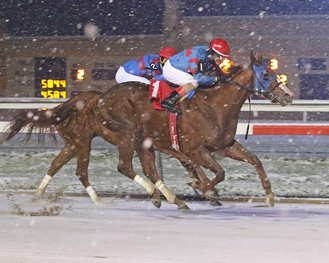 Sassy Lad (Photo by EquiPhoto)Sassy Lad ran once as a 2-year-old and has run 10 times this year with two wins, four seconds and one third.

"It looks like he's a come from behind sprinter," said Houghton. "He's been knocking on the door and now won again. It seems he always gets a bad, inside post."

"Mom bred him out of one of her better mares, Deanies Dancer,"said Houghton. "He's been a little of a bad actor in the gate, so we've had a bit of a situation with him,  but he's fast."

Richard Bosshard Jr.'s homebred Heavenly Heart won an $18,000, 6 furlong Starter Optional Claiming race for fillies and mares 3 and up by a neck on Nov. 2.

"That's a filly he bred, and he sent her to me as a 2-year-old," said Houghton. "She''s has a lot of seconds and thirds. She's always in there trying."

Heavenly Heart has run seven times, all as a 3-year-old, and has won twice with two seconds and two thirds and earnings of $44,892.

GRAHAM MOTION saddled Bipartisanship, owned by Fortune Racing, LLC (al Maktoum), to win the $75,000, 1 mile on the turf Kathryn Crosby Stakes for fillies and mares 3 and up by 1 length at Del Mar on Nov. 12.

That was the 4-year-old's third win and second stakes win from 12 starts.

BUTTONWOOD FARM owned by the Rodney Moorheads of West Grove, Pa., had a winner in Ireland.

Demandrivingdouvan pressed the leaders, led after 6 furlongs, went clear from 2 furlongs and kept on well or the win.

Keri Brion trains for the Moorheads in this country.