UNIONVILLE, Pa.--It was only a three horse field, but it still came down to a fight to the finish as Upland Partners' Mystic Strike won the 4 mile, $35,000 Pennsylvania Hunt Cup Timber Stakes by 2 lengths over Charlie Fenwick's Royal Ruse, trained by Sanna Neilson, with Mercoeur, who had led for much of the race, a distant third. 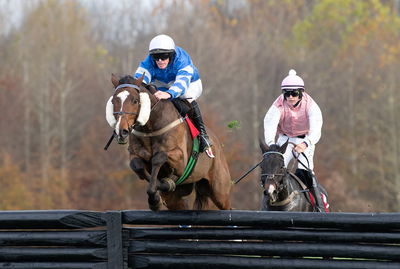 Mystic Strike leads Royal Ruse at the last in the Pa. Hunt Cup (Photo by Tod Marks)Trained by Todd McKenna and ridden by erard allian, this was Mystic Strike's third win, having previously won in 2018 and 2020, then finishing second last year to Goodoldtimes.

"It's an incredible thrill," said Bill Wylie of Upland Partners. "I'm one of several in a group. We've foxhunted together for years. It's been an incredible ride to have a horse that's been so good for so long. He's won here twice before. He came in as a probable favorite, so expectations were high, but you're always on pins and needles when he runs."

Tiepolo, ridden by Freddie Procter, had led for most of the race but was caught going to the last fence.

"I HAD A horse fall next to me," said Smith, admitting that it shook him a bit when Lonely Weekend fell early in the race. "This was a slightly smaller field than last year."

While it was a smaller field, it was a more successful group as only one horse of the seven starters in last year's race finished.

Murphy got Mr. Fine Threads to break, and then he was sent to William Santoro who trained and raced him in 2019 and 2020, but he was returned to Murphy in time for Willowdale this year.

"It's pretty special to have two winners in a row here," said Murphy. "They're both great individuals and great to work with."

Boutonniere was left at the start, then finally started but was at least 30 lengths behind, slowly gained on the field and got into contention after 2 miles but couldn't catch the winner.

"This is a great jumping course," said Watters. This is a nice, big traveling horse. I could feel the other horse closing in. I didn't have a good last fence, but luckily he landed running."

"This is the second year I've won this race," said Watters. "I won it last year with Road to Oz for mark Beecher."

Summer Anthem won the race by a neck in a very hard fought finish over He De Da Bomb,, trained by Young and ridden by Virginia Korrell.