Matz had three 2-year-old winners, Motion and Houghton had multiple winners, and Jenkins had a win 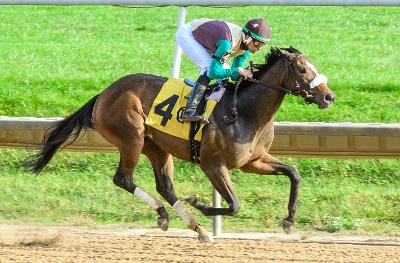 Late Frost winning at Delaware Park (Photo by Hoofprints, Inc.)"One minute you think you don't have anything, and then these three pop up," said Matz.

Gregory and Caroline Bentley, owners of Runnymoore Racing, bred two of the 2 year olds, a filly and a colt, while the third, another filly, was bought by their manager, Joe Bentley at last year's Timonium yearling sale.

Runnymoore's homebred Late Frost, by Frosted, won a $44,000, 6 furlong Allowance race by 8 lengths at Delaware Park on Oct. 28 in her second start after winning a maiden claiming race on Sept.16.

"She looks like a pretty nice filly,"said Matz."It looked like she handled herself pretty well in that race."

"Her mother died when she was born," he said. "I think she had some tough times growing up. She has some scars on her hind leg. She's a tough little thing.That's probably why she made it."

"Alla Breve was bought at Timonium," said Matz. "She was a little late coming along. I was really pleased with her race."

Runnymoore's homebred Picture This, by Munnings, won a $44,000, 6 furlong Allowance Optional Claiming race for 2 year olds by 1 length at Delaware Park on Oct. 29.

Picture This was sixth in his first race, a maiden special weight, then won a maiden claiming race at Delaware Park on Oct. 6.

"Picture This will run back in the Nursery Stakes at Parx on Nov. 29," Matz said. "We don't have anything picked out for the other two yet. I was pretty please with the way all three raced."

Highland Chied ran close to the pace in the 12 horse race and won under a drive.

Sparkle Blue ran third in the 10 horse field, moved to second in the stretch and kicked clear for the win.

Madakt Stables Wooten Asset won a $110,000, 1 mile Allowance Optional Claiming race on the turf by 1 length at Belmont at the Big A on Oct. 27.

BERNIE HOUGHTON had four winners over the past two weeks, all at Penn National.

Rain Lily dueled for the early lead, put the field away on the turn and drew off to win impressively.

Both Maiden winners were bred by Bernie's mother Betsy at her Sylmar Farm in Christiana, Pa.

RODNEY JENKINS saddled Hillwood Stable's homebred Misty's Lass to win a $57,580, 5 1/2 furlong Maiden Special Weight for fillies and mares on the turf by a neck at Laurel on Oct. 30.