Ani'amu and Down Royal win the two $75,000 Stakes at the International Gold Cup 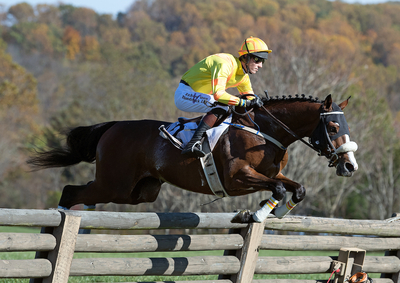 Andiamu leads in Timber Stakes (Photo by Tod Marks)Ballybristol Farm's Andi'amu, ridden by Freddie Procter, went right to the lead in the 3 1/2 mile Timber Stakes, leading at times by 20 or 30 lengths over the five horse field to win with ease by 9 3/4 lengths over Cracker Factory, trained by Mark Beecher and Flaming Sword, trained by Richard Valentine.

Those wins extended her lead in Trainers, Races Won to five, with 30 wins, to Keri Brion's 25 wins, while Fisher, who also had two winners in the Gold Cup meet, is third with 18 wins.

Brion continues to lead over Young in Trainer, Money Won. 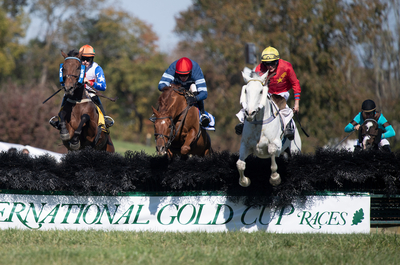 Down Royal, gray, leads City Dreamer, red cap, and Going Country, left, over the last in the Hurdle Stakes (Photo by Tod Marks)"He's got a long stride, and once he gets into a rhythm he can run all day," said Procter.

"He's had a couple of ups and downs when we had to rest him," said one of Andi'amu's owner, Mr. Collins. "Leslie has been very patient with him."

Down Royal ran third in the four horse field for much of the way,  went to the front going to the last jump and won comfortably.

"Down Royal has always been a wonderful jumper, but today she jumped exceptionally," said Bernie. "Going to the second to last fence, I felt like she was going good and still had gas in the tank. At the finish, I said, "Damn, I was right, she was going good."

"She's been great fun for all of us," said Fowler.  "All credit to Kate and Bernie."

"She's got to be in the hunt for the Eclipse Award, with one grade 1 win and one grade 2 win, but I wouldn't expect it," said Bernie.

Earlier this year Down Royal won the G1 A.P. Smithwick Stakes at Saratoga and last May won the Margaret Currey Henley Stakes at Iroquois.

"Ping Pong was a very immature 4-year-old, but he handled himself well today," said Watters.

"Jill Johnston said to hunt him this fall," said Fisher. "He was definitely mentally challenged when we first got him, but he's matured."

Doug Fout saddled Rolling Tide's Gold to win the first race on the card, the first section of the Maiden Hurdle, by 5 1/2 lengths over Left Blank, trained by Todd Wyatt.

The three maiden races each had full fields of 10.

Robert's Luxury, owned by South Branch Equine and trained and ridden by Sean McDermott, won the $35,000 Allowance Hurdle by 3 3/4 lengths over Jimmy P,  trained by Brion.

"He's a big horse," said McDermott. "I ran him earlier this year at Colonial just for experience. He's an okay jumper, and I can ride him anywhere, in the front or behind, I probably won't run him over fences again this year."

"She ran good," said Hendriks. "She ran in her first race in this country at Middleburg and was very unlucky. She almost got carried out by another horse at one fence. But it was lucky because it kept her rating so she could run today. She traveled great and jumped great except for one on the backside. I probably hit the front too early, because she pricked her ears and relaxed."

"I have to thank Danny Mullins and Davy Russell for her," said Brion. "They put me on to her. She was too good and they wanted her out of the country. I love her, and I'm excited to have her. It was nice to be able to take advantage of her rating today. She'll go to Montpelier for the filly and mare race."