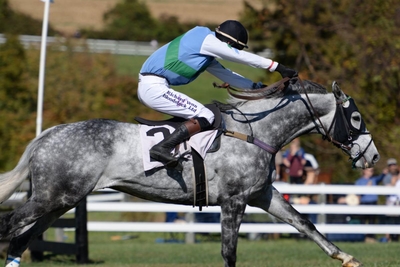 Tiepolo, trained by Elizabeth Korell, was ridden by Freddie Procter and won by 1/2 length over Huyana, trained by Casey Pickard.

Procter rode the gelding because Virginia, who usually rides Tiepolo, broke her leg in an unusual accident a couple of months ago,

Virginia had finished galloping a set for trainer Leslie Young, and the set was walking back when the horse near Virginia kicked, hitting her leg and breaking it.

"Virginia is back riding and working, and she's getting better slowly but probably won't be back to riding in races this fall," said her father Brian.

"THERE WERE four runners in the race, and Tiepolo jumped off ion the front end," said Brian. "He was a length or two in front all the way. He jumped very well, and the others couldn't catch him. He won easily."

"He came back in good shape from the race," said Brian. "He'll run next in the maiden at the Pennsylvania Hunt Cup. Point-to-points don't count for National Steeplechase recognized races, so he's still a maiden."

Irvin L. Crawford's To Be Or Not to Be, trained b Joe Davies and ridden by Theresa Dimpfel, won the $4,000 Novice Timber by 2 lengths over Profiteer, trained by Pinkard.

Along with the three timber races there were seven flat pony races, and full results can be seen on line at the Central Entry Office.