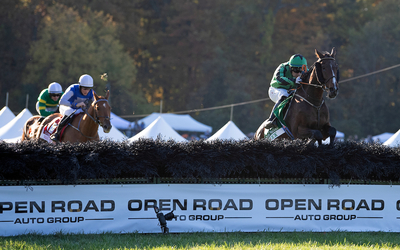 Hewick leads Noah And The Ark over the last fence in the Grand National (Photo by Tod Marks)Gordon Elliott, one of Ireland's leading trainers, brought three horses and won two races and was third in the other, while John (Shark) Hanlon brought one horse and won the biggest prize of all, the $250,000 Grand National Steeplechase.

Favored Snap Decision finished sixth of the seven that finished, after Moscato fell and Pistol Whipped pulled up.

Hewick had previously this year won twice in Ireland and finished second once.

HANLON and Hewick's connections were ecstatic, with Hanlon wrapping himself in the Irish flag and repeatedly raising the trophy over his head. 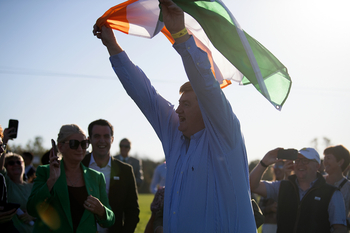 Shark Hanlon enjoys the win (Photo by Tod Marks)Hanlon said he and the owners were watching together and couldn't believe Hewick was going to win.

"He was super," said Hanlon. "We saw he was traveling so well, but then we were saying to each other,`this race is too short for him'. This is a dream come true for all of us."

Hewick was bought at the 2017 Goresbridge Bloodstock Sale for $991, a purchase that prove quite worthwhile.

"The crowds here are fantastic," said Hanlon."We never get crowds like this in Ireland."

The Far Hills race course was indeed packed,with cars stacked up 10 deep behind the rails, and spectators reveling in the beautiful fall day, with plenty of tailgating involving liquor and food being enjoyed.

Hoffman, who had more experience over fences as Irish steeplechasing begins earlier in the year that does American jump racing, had been favored to win, but, again, this Irish invader decimated the opposition.

Brion also saddle Paul A. Willis' Agitate (Ire), ridden by Bernie Dalton, to win the $100,000, 2 mile John Forbes Memorial Turf Stakes by 4 3/4 lengths over Basso, trained by Gregor Sacco in the largest race of the day with 14 entries.

In the last race of the day, the fences on the back side of the course were taken out due to shadows having fallen as the day had gotten late, leaving only five fences in the 2 1/8 mile race.

While Brion won two races on the day, flat races don't count towards Leading Trainer, Races Won, so, with 24 wins, she remains four races behind Young, with Fisher third with 16 wins..

Brion continues to lead over Young and Fisher in Trainer, Money won.

For fans in the know and capable of getting Fox Sports, the races were televised by Fox Sports and seen along with all the races from the Belmont at Aqueduct races